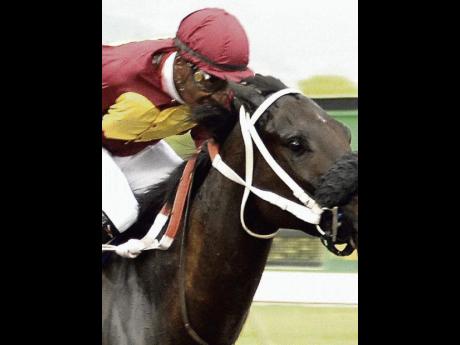 SHE'S THE ONE, with Carlton Malcolm aboard, romps the eighth race for 3-y-o claimers (180,000), over the straight-five course at Caymanas Park on Saturday. - Colin Hamilton/Freelance Photographer

The 2010 schedule of mid-week racing commences at Caymanas Park today with an overnight allowance event over the straight-five course taking centre stage.

Significantly, the nine-race programme offers no trophy races, which is indeed surprising, considering that three were run on Saturday.

As a result, the overnight allowance sprint moves into the spotlight as the most valuable race on the card with a purse of $715,000. This has attracted seven starters, including the sparingly raced five-year-old gelding, COMMANDER ZERO, to be ridden by champion jockey Omar Walker for champion trainer Wayne DaCosta.

COMMAN-DER ZERO left the park on a losing note on August 22 last year when beaten into fifth place (led for 1000 metres) by WORKING IMAGE over 1200 metres. This as the howling 2-5 favourite.

Although absent from active competition since, COMMANDER ZERO has had a long and steady preparation and is fit and raring to go. He looked real sharp at exercise on January 13 when galloping from the gate in a fast 59.3, the last four in 46.3.

Although out for the first time in over five months, COMMANDER ZERO runs best when fresh and with only 53.0kg, should return with a bang.

The son of He'stherealthing-Arantxa, commander zero last won the Easter Sprint Cup over 1100 metres in April of last year, covering the distance in the smart time of 1:05.1. None of his six opponents seem capable of running such a fast time on the round course, and although this marks his first outing over the straight, he should have no problems adapting to it.

What's more, COMMANDER ZERO was a leading classic contender in 2008, finishing second to arch-rival ROYAL IMAGE in the 2000 Guineas and third to IT IS I in the Governor's Cup over 2000 metres.

But COMMANDER ZERO has taken to sprinting and despite the sound claims of the consistent TRIPLE ACCOUNT, GRACE MARIE as well as the former champion sprinter MUSICAL MAESTRO who races for the first time in 13 months, 'COMMAN-DER' should return on a winning note under these conditions.

Elsewhere on the programme, which commences at 1:25 p.m., the down-in-class TOBAGO and consistent THE BEST MAN should fight out the finish of the opening $550,000-$500,000 claiming race over 1200 metres to be contested by six starters.

The nine-year-old gelding TOBAGO has beaten better in the not-too-distant past, is quite effective over the distance and can definitely rebound in this easier spot.

However, THE BEST MAN is so genuine and consistent that he should rebound from his near miss against WILD GLITZ on January 1 over 1100 metres when suffering interference at a crucial stage.

I also like TRIAL LAWYER in the third; RUNNING LOOSE to repeat in the fifth; MAGNIFICO in the seventh; and GLOBAL MINISTER to go one better in the ninth.