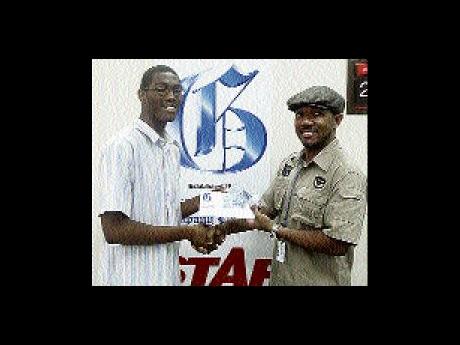 Hanief Lallo, winner of the Youthlink Jazz and Blues talent competition, was in a jubilant mood yesterday after collecting his prize from Youthlink coordinator Kareem Latouche, at The Gleaner's North Street offices.

Lallo, 20, won two tickets, an opportunity to speak with any three music stars in person, and free transportation to the venue for tonight's show at the Trelawny Multi-purpose Stadium.

"I'm happy. I was supposed to go last year but I didn't end up going, so I'm glad for this opportunity," said the former Ardenne High School student.

Youthlink, a publication for teens printed by The Gleaner, hosted a virtual talent contest through popular social networking site Facebook.

Contestants were asked to post videos of themselves playing an instrument or singing a song and these were later judged by a panel, before being put up for public votes.