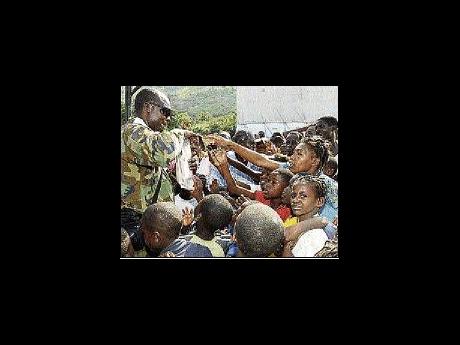 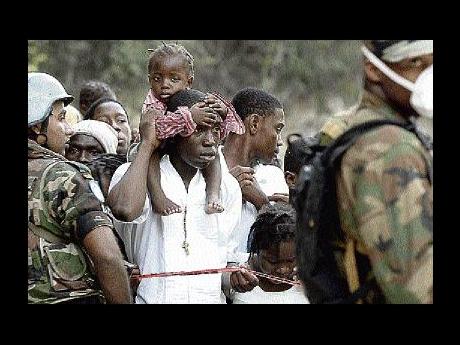 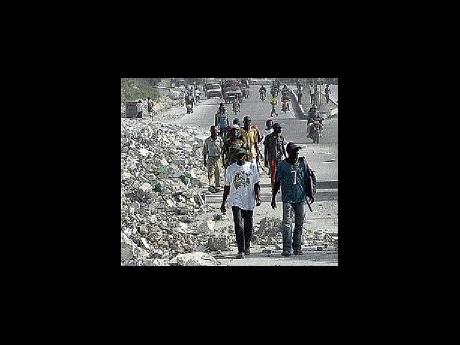 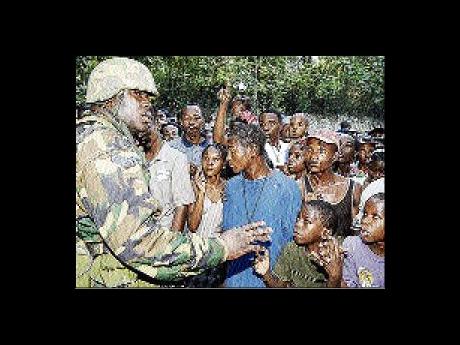 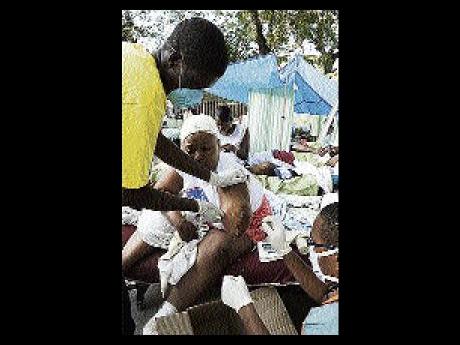 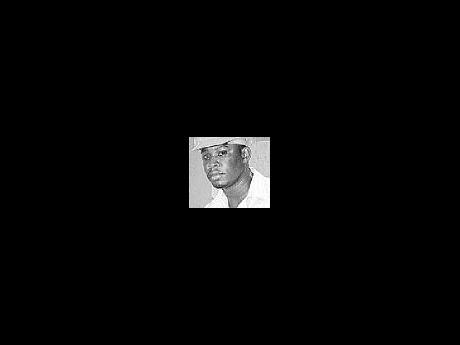 This baby gets a great view of the relief she so badly needs, as Jamaica Defence Force soldiers ensure there is some order.

IT WAS quite disturbing to see Jamaican health workers removing stones, sticks and other foreign materials from wounds that had been poorly dressed by health workers from other countries.

But, in the midst of Haiti's plight, there was the occasional reason for one to have a good laugh. One of the few light moments came when watching a member of the JDF - a corporal who is affectionately called 'Labba' by his colleagues - use the popular fruit susumba or 'gully bean' to discipline a rowdy crowd.

Labba is a strapping man with commanding presence, whose duty was to keep the crowd in-line while other JDF personnel distributed rations. He did his job without fear or favour.

With a rifle in one hand and a 'rod of discipline' in the other, this soldier 'communicates' efficiently with Creole- and French-speaking natives.

At times, he would put the stick aside, swing the rifle across his back and clap his hands loudly so as to get everybody's atten-tion. Then he would shout, "Aller, aller", which means get back or move.

There was one occa-sion when Labba didn't bother to either shout or wave his hands to get people moving. In Killick, a town outside Port-au-Prince, Labba, faced with a boisterous crowd, calmed them by eating the susumba or gully beans.

The fruit, which many Jamaicans mix with saltfish for a tasty meal, is reportedly used by some Haitians as part of their voodoo practice.

In Killick, Labba found a susumba tree and plucked a few from it. He held it up for a portion of the crowd who frantically waved him off. The soldier then calmly plucked one from the bunch, chewed and swallowed it. Eyes popped everywhere; Labba had worked magic and it was the key that he needed to gain control of the crowd.

There were some volunteers who needed no magic. Orthopaedic surgeon, Dr Edgar Abbott, like other members of the Jamaican medical contingent, was one such person. This doctor said he found it almost impossible to raise his camera and take pictures. Haiti was too grey for that.

Abbott spent his first few minutes at a hospital mopping the floor in order to get ready for operations. There was one occasion, after signing off for the day, when he returned to the operating room because the bus had not come in time to take him back to camp. That same evening he had to be extracted from the theatre as he was getting ready for an amputation. A baby was on the table and doctors were preparing to remove her legs.

Choice between life and limb

Dr Abbott also told me the story of how he was able to save a woman's hand after the ground was being laid for its amputation.

The doctor said that he had not seen the hand before the patient came to him crying.

"She said that her husband would leave her if she had only one hand," the doctor recounted.

Another health worker recounted an episode involving a woman whose leg was to be amputated. The woman, despite being in obvious pain, objected to the doctors amputating her leg. The doctors told her that if they did not amputate the leg, she would die.

"Give me the coffin; let me put it under my arms and walk with my legs," the woman is reported to have said. Two days later, as her condition worsened, she asked the doctor to do the best he could to save her life. She lost the leg.

Leaving Haiti was great relief. A warm bed, good food and a cleaner environment beckoned. But the miles of sea will not wash away the memories of that haunting week; and neither should we allow that sea to be a buffer between us and our Caribbean neighbours.

From the conversations I have had with many Haitians, there is an undying commitment on the part of young adults to advance the growth and development of the nation. I am, however, worried for Haiti. Many of its young bright minds were in university classrooms on that fateful day. Many were buried in the rubble and, with them, much of the nation's hopes for a brighter tomorrow.

Rubble has become a part of the landscape of Port-au-Prince and seems to go almost unnoticed by the Haitians who call the city home.

This woman watches as a foreign object is pulled from her recently amputated hand.