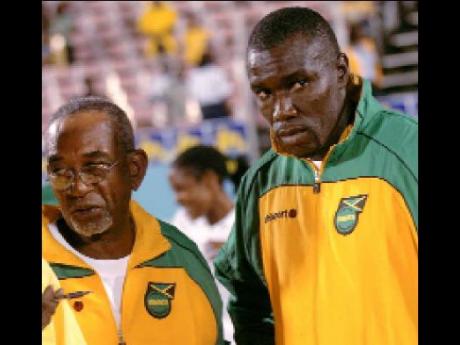 LIKE a conductor directing a choir of singers, Theodore Whitmore patrols the pitch - mostly along the sidelines - signalling instructions to his troop of Reggae Boyz.

In preparation for this Sunday's friendly international against Canada, that is scheduled to kick off at 7 p.m., the head coach, in collusion with his assistant Bradley Stewart, is working overtime - morning and evening - to fine tune the charges.

Across the length and breadth of St George's College's Winchester Park pitch, they run a series of drills, looking to improve their skill and understanding for the team game.

"Possession, closing down, passing, supporting with angles at high intensity ... that's what we were working on mainly," explained Whitmore of the near two-hour exercise that ended with a prolonged "crossing and finishing" practice.

The latter was a mixed bag - great at times; not so wonderful on other occasions. But the coach isn't worried one bit, choosing to deflect the mis-firings on a bit of tiredness.

They have been camping week-in, week-out for the contest, which is one of two scheduled in close pro-ximity. The other, against Argentina, will be played in the South American country on February 10.

Given that there is no important competition on the horizon, the Jamaica Football Federation (JFF), through its president Captain Horace Burrell, said it will use Sunday's match against Canada to launch its 2014 World Cup build-up.

As such, a number of schoolboys have been invited to the series of camps that have been held recently and there is indication that a few might be given a run come Sunday.

"You've young Ricardo Morris, Jason Johnson, Deshawn Brown, Marvin Morgan, Christopher Waugh and we've young André Blake, the goalkeeper, one for the future," Whitmore noted of the budding schoolboy stars among his ranks, as they made their way off the pitch and into the team bus.

Whether they are in the team, practice match or not, Whitmore says they will be raring to go against Canada, which they beat 3-0 in their last match-up here (World Cup qualifying last November).

"All the players are very focused," he said. "One thing with the national team is we're always ready."

He added: "What I really like is that most of our overseas-based players aren't available, so it gives our local players a chance, it gives us a chance to see what we've going forward," pointed out Whitmore,.

Back then, when he used to pull the strings from the middle, the team had some real stars, players with real people-pulling power and quality that lit up the park and brought results good enough to land the team a first senior World Cup appearance in France.

Asked if there's any real search now for such potential in this budding group, Whitmore, a midfielder dubbed 'The Magician' for his exquisite skills in his playing days, says it's not quite so.

"I wouldn't say we're looking. Most of the times we don't have time. Now we've until 2014 and in all of these areas we're looking to make headway going forward."

For the moment, he continues to wave his wand, looking to choreograph a winning rhythm against Canada.

"We always want to win, regardless of the situation," he said. "This is the national team ... we want to show the fans that there's still hope."