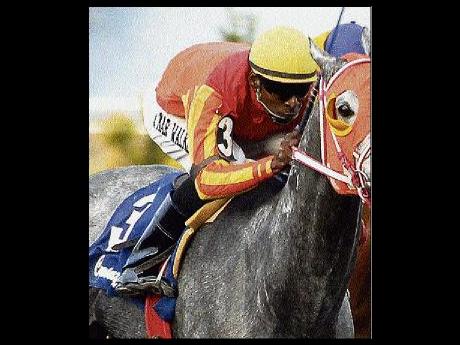 COMMANDER ZERO is pushed out by champion jockey Omar Walker to win the eighth race for overnight allowance horses, over the straight five course, at Caymanas Park yesterday. Trained by Wayne DaCosta, the five-year-old gelding was a 1-2 favourite in a field of seven. - Colin Hamilton/Freelance Photographer

COMMANDER ZERO easily justified favouritism at Caymanas Park yesterday when streaking away from FIRST TIME LUCKY in the 3-y-o and up overnight allowance race over the straight five course.

Ridden by champion jockey Omar Walker for nine-time champion trainer Wayne DaCosta, the sparingly raced five-year-old grey gelding by He'stherealthing out of Arantxa was ridden to dispute the lead with highly fancied FIRST TIME LUCKY in a field of seven.

Rubbing shoulders coming on to the main track, COMMANDER ZERO, responding to a vigorous ride from Walker, moved into overdrive approaching the distance to win by all of six lengths, covering the distance in the smart time of 57.1.

Installed a 1-2 favourite, COMMANDER ZERO was racing for the first time since August last year, but this was his first win since squandering the opposition in the Easter Sprint Cup over 1100 metres in April last year. He won that race in the very smart time of 1:05.1.

COMMANDER ZERO is owned by Von White and trained bred by the Orange Valley Estates Limited. A leading classic contender in 2008, COMMANDER ZERO has now won six races from only 10 starts.

Walker and DaCosta had a second winner on the nine-race programme in 1-9 favourite TRIAL LAWYER, who romped the fourth race over 1400 metres for three-year-olds, scoring by 4 1/4 lengths from PRINCESS AUDREY in a field of six.

Walker's double pushed his season's tally to six. He is joint third with Paul 'Country' Francis in the standings - two adrift leader Shane Ellis, who failed to ride a winner on the card. Dane Nelson rode one winner in 2-5 favourite SULAMANI to be second with seven wins.

Meanwhile, female apprentice Georgina Sergeon, who started riding on September 2 last year, notched the third win of her career, coming from last to first aboard 7-2 chance GO ROBIN GO in the fifth race over 1820 metres, winning by 9 3/4 lengths from the favourite COUGWAY in a field of six.