Rae wants all 'hands on deck' 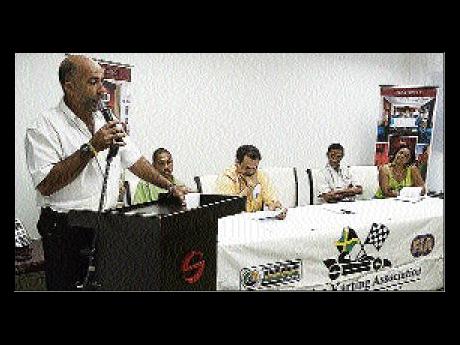 Peter Rae addressing the members with some of his executive looking on in the background. From left: Martin Anderson (director), Mike Simmons (treasurer), Guy Eaton (vice-president), Heather Eaton (secretary). - Contributed

He has been one of the country's most consistent motorsports competitors over the past two decades.

On Tuesday night, members of the motor racing fraternity paid homage to Peter Rae by electing him as the new president of the Jamaica Karting Association (JKA).

The new cabinet led by Rae will comprise the wife and husband combination of Guy and Heather Eaton, who are now the vice-president and secretary, respectively, and veteran karter, Mike Simmons, who was named as treasurer.

The members of the executive team, which include four directors, are past presidents Neil Williams, Dwight Moore and David Wong, and race driver Martin Anderson.

"While I will be entertaining an open door policy I need all hands on deck," commented Rae, during his inaugural speech at the Spanish Court Hotel, New Kingston, where the JKA held its meeting.

Among his priorities are marketing and promotions to increase spectator interest and income for the club.

"I want to increase competitor memberships and also focus on the 50cc class which is the entry level, because this is where the fresh and young talents are coming from," said Rae.

He and his team will also be reviewing the plans for this year's International Karting Carnival, which usually takes place in July.

"We might reschedule it for later in the year," the newly elected president told The Gleaner yesterday.

Chairman of the Sports Development Foundation (SDF), Dwight Mais, who was the guest speaker at the function, stressed that karting is the transition stage for young karters.

"Motorsports has become one of the top sports in this country," said Mais.

In the meantime, Minister of Youth, Sports and Culture, Olivia Grange, took the opportunity to congratulate Rae.

"I know he will provide the leadership that is necessary in this economic climate because motorsports has great potential and can be an income generator for sports tourism," said Minister Grange.

The Minister further made a proposal, one in which Jamaica could be used as a hub and a centre for motorsports in the region.

"The government could provide an incentive and persons would come here, leave their cars and we take care of them. This could make a significant contribution to sports tourism."