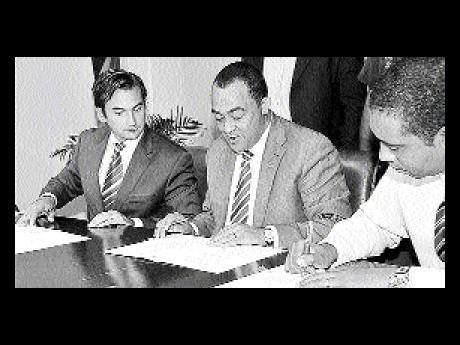 Jamaica and the World Bank signed a memorandum of understanding on Tuesday at the offices of the Ministry of Agriculture and Fisheries, Old Hope Road, Kingston, to study weather risk on coffee crops in the Blue Mountains. Seen here at the signing are (from left) World Bank senior agriculture economist Diego Arias, Minister of Agriculture Dr Christopher Tufton, and Christopher Gentles, director general of the Coffee Industry Board. - JIS

THE WORLD Bank has agreed to back a feasibility study on a crop insurance scheme for Jamaican coffee farmers, whose fields have been without coverage for more than five years after sole insurer Dyoll collapsed under storm damage claims it could not pay.

The cost of the study, which will centre on farms within the Blue Mountain region, was not dis-closed, only that it was being financed by the World Bank through a grant from the European Union's All ACP Agricultural Commodities Programme.

The feasibility of the scheme is to be tested, but the World Bank said Tuesday that the study would take coffee farmers one step closer to crop insurance against the elements.

Between 2004 and 2007, Jamaican agriculture recorded losses of $13.5 billion from several storms over the period.

The fallout for coffee farmers, most of them small operators, was $51 million, according to Agricul-ture Minister Christopher Tufton. The coffee farms have been exposed since 2004, when Hurri-cane Ivan wreaked havoc across Jamaica and The Cayman Islands in September of that year.

Finding a new insurer has been difficult because of the risk associated with small farms, but also the technical challenges in designing policies dealing with floods and storms.

The agreement with the World Bank, signed in Kingston Monday, will address those technicalities through the design of a 'weather-risk' insurance model that will also test the feasibility of such a scheme.

The bank has done five years' work on weather-risk management using parametric modelling - on which the hurricane and earth-quake insurance schemes for the Caribbean were developed - saying it was this track record that prompted Jamaica to seek its assistance on agriculture.

"The World Bank is ready to support Jamaica's efforts to develop agriculture insurance for the coffee industry by providing the necessary knowledge, expertise and services."