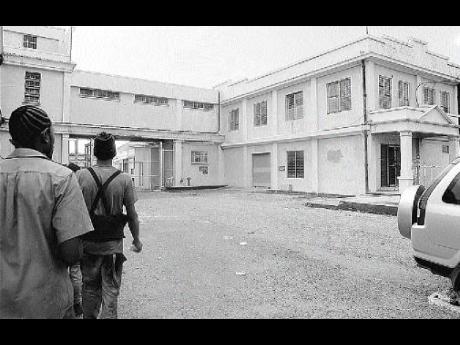 The Machado Building at the intersection of Victoria Avenue and South Camp Road. - Ricardo Makyn/Staff Photographer

THE URBAN Development Corporation (UDC) has bought the old Machado complex in Kingston for $80 million, which it will convert into its new headquarters.

UDC General Manager Joy Douglas, who confirmed the purchase, said the agency acquired the property, which sits on three acres of land - and which was once used for the manufacturing of cigarettes - from Kingston Restoration Company (KRC), which has owned the complex for two decades.

But UDC won't be relocating before 2011, allowing itself time to refurbish and retrofit the building, and add parking spaces, Douglas told the Financial Gleaner, saying it could be a year to 18 months before the move from the state agency's current base at the Office Centre Building at the downtown waterfront.

The Machado Building lies on the opposite end of the city, at the corner of Victoria Avenue and South Camp Road.

UDC is giving up its more scenic base for monetary reasons - to make room for private-sector investment in the eastern section of the downtown waterfront, and the demand for office space there.

Douglas said the 200,000-square foot Office Centre Building - which goes up to 12 floors - at 12 Ocean Boulevard was being placed on the market for sale in two weeks.

"We will be advertising it for sale, but they won't be getting vacant possession and the tenants will not be affected," she said.

The office complex, which was built in 1974, includes the towers, and areas now occupied by the National Gallery, among other tenants.

KRC Executive Director Morin Seymour was pleased with the deal on the Machado sale, which gives his agency a $76-million premium on the price it paid for the property back in 1988.

"It is a wonderful transaction," he said.

KRC is a state agency tasked with rehabilitating and regentrifying downtown Kingston.

The agency acquired the property for $3.75 million in 1988 from the Cigarette Company of Jamaica, the now-defunct subsidiary of Carreras Limited. Before that it was owned by the Machado family.

Seymour said the complex was converted from tobacco to a garment factory in the 1980s, with about 6,000 employees.

"When the garment industry died, we leased out the building to different tenants," he said.

The current tenants, which include welding operations, furniture manufacturing and electrical engineering, were given notice and should be out by this weekend, Seymour said.