Stranded teen to be flown in from Haiti 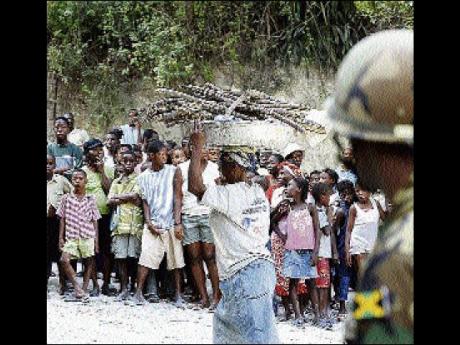 This Jamaica Defence Force soldier watches as children from Killick in Port-au-Prince, Haiti, line up, hoping for relief supplies. A woman passes with wood atop her head, presumably to make fire for cooking. - photos by Ian Allen/Photographer

A teenage Haitian girl of Jamaican parentage, stranded in Haiti for more than two weeks, is to be flown to Jamaica this morning.

Fifteen-year-old Paula Sabrina Brown was located by a team from the Jamaica Defence Force (JDF) early yesterday but was reluctant to come to Jamaica.

The teen was located near Port-au-Prince in the care of her aunt, but had reportedly been walking the streets near the Haitian capital for more than two weeks following the country's devastating magnitude 7.0 earthquake.

Late yesterday, Information Minister Daryl Vaz told The Gleaner that the ministry had contacted the child's mother in the United States, who has consented to having her daughter taken to Jamaica.

"I have already issued instructions to the JDF to make the necessary preparations for the teen's departure to Jamaica," he said.

"Her arrival to Jamaica will be done speedily, and I expect that she will beflown to Jamaica in a matter of hours. From all indication, she appears to be in good health, but according to reports she has no knowledge of the English language."

Vaz lauded the efforts of the JDF team, which was able to locate the teenager in less than 24 hours.

"Her situation was treated as a matter of priority. The request from the grandmother was a genuine one, and we reacted promptly to the request," said Vaz.

On Wednesday, the teenager's grandmother had made an impas-sioned plea for youngster to be taken to Jamaica because she was on the streets, hungry and cold.

The girl was, in fact, living in a tent near the Haitian capital with her aunt, along with about 20 other Haitians.

She is scheduled to arrive in the island at approximately 5:30 a.m. today.

In the meantime, Doris Lightbody, grandmother of the 15-year-old, has been contacted and, according to reports, is eagerly awaiting the arrival of her granddaughter.