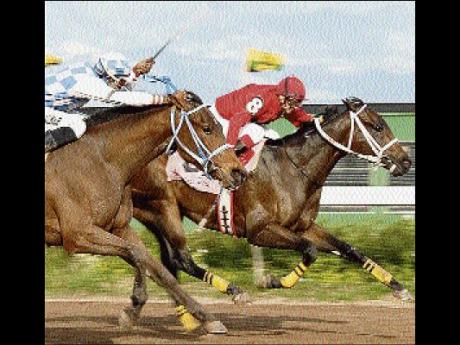 The 8-5 favourite MEELO (inside, Dick Cardenas) holds on by a short head from BULLET LINE (Omar Walker) to win the sixth race over 1100 metres, in a driving finish, at Caymanas Park on Wednesday. - Colin Hamilton/Freelance Photographer

Thanks to a 33-1 upset by JAMMING in the seventh race at Caymanas Park on Wednesday, the Pick-9 had no takers and the carryover going into tomorrow's meet stands at $1.8 million.

Tomorrow's 10-race programme marks the seasonal debut of leading 'Horse of the Year' contender AHWHOFAH, one of seven horses declared for the Abe Issa Memorial Cup feature over 1200 metres.

Included in the line-up are the recent winners POORLITTLERICHBOY and MISS TIMS, but neither seems good enough to beat top contenders RED LION and DR. STEPHANIE as both have beaten much better in the not-too-distant past.

Preference is for the down-in-class DR STEPHANIE, who caught the eye when finishing a close third to THE SMOKER over 1600 metres on a $350,000 claiming tag New Year's Day. She returns on a $250,000 tag with a mere 50.0kg for the services of 4.0kg claiming apprentice Robert Hallendeen and should stave off RED LION, who returns under new management.

Next on the programme is a 1400-metre race which promises keen competition among the nine starters. I have short-listed a group of horses from which the winner should emerge: ROLEX, BELOW THE WAIST, CHINA CROSSING, BIG DIVA and the front running DIABOLICAL KID who carries top weight of 57.0kg and champion jockey Omar Walker.

There was a lot to like but the manner in the Tony Kirlew-trained American filly BIG DIVA won the Sweet Ruckus Trophy over the distance on December 23 and having looked the part at exercise in preparation for this race, gets the nod with leading all-time jockey Winston Griffiths taking the ride. BELOW THE WAIST and ROLEX are twin dangers.

SUGAR'S IMAGE, having beaten much better last year and dropped in class tomorrow, looks a banker in the seventh race (high claiming) over the straight five course in which RANKING and the very fit DANIELLE MY GIRL should follow him home.

Then, take the consistent NEPTUNE to outfinish BROTHERLY LOVE and SIR JAADU BABA in the eighth race over 1400 metres, champion sprinter AHWHOFAH to catch the fleet-footed filly SAINT CECELIA in the ninth for the Abe Issa Memorial Cup, and SPIRITUAL CHOICE ahead of old rival MYRTLE WAY and RUN SMILE RUN in the nightpan.