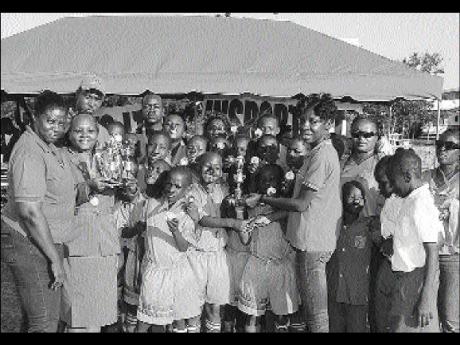 The performance of the week on the bridge circuit came from the veteran pair of Audley, Astwood and Winston Chin-You who posted an incredible 68.13 per cent round to win Monday night's leg of the Horace Payne Memorial Trophy by several city blocks from Rex James and Judy Ziadie (58.75 per cent).

Third was Wayne Chai Chong and Karl Lee (55.63 per cent) who are now definitely rounding into form after a long lay-off in the last third of 2009.

It was ladies on top in Wednesday night's leg of the Dr David Levy Trophy as Monica Cools-Lartigue and Marlene Fulford teamed up to defeat all comers with an excellent 64.81 per cent round. Second was Calvin Wong and Charles Williams (56.02 per cent); third the ultra-consistent pair of Rex James and Judy Ziadie (53.70 per cent).

Meanwhile, in last Tuesday's round of matches, Kool Kat, led by Dwight Anderson's double, beat Prospect 3-2. Dermain Lewis scored the third goal for the winners while Tyson Robinson and Wayne Henry netted for Prospect. In another match on the same day, Yallahs, with strikes from Dushane Robinson (25th) and Junior Orr (76th), beat Danvers Pen 2-0.

Prizes will be awarded to the top-three players in each section, the best Under-10, 12 and 14 year-old players, best rural player, best female player, best junior and best new player.

The tournament, which was previously called the New Year's Open, was renamed in honour of National Master John Powell, a founding member of the JCF and former president who passed away in October, 2007.

Forty-four golfers teamed up on Wednesday at the Caymanas Golf Club to play in a 'Better Ball' team event to raise funds for the Haiti relief effort. They raised and handed over $150,000 to the Red Cross at the end of the tournament.

Caynanas Golf & Country Club hosted the event free of charge as their contribution to the effort.

The teams were locked at 0-0 after regulation time, and penalties decided the winners. The best goalkeeper, Travis Brown, saved the last penalty from a Gregory Park kicker, which saw the Bridgeport players, coach David Richards, teachers, parents, and the principal, Lorna Lewis, cheering on the winning school. Naggo Head defeated Waterford 3-2 on penalties to take third place. Seven of the eight quarter-finalists were Portmore schools.

Bridgeport's Durella Green got the best defender award while Waterford's Jewani Hinds collected the most outstanding player award. Gregory Park did not leave empty-handed, as apart from the runner-up trophy, their best player, Nicholas Nelson, was named the most-valuable player of the final.

Leaders Racing United (15) will tomorrow hunt their sixth-straight victory against Daytona (six) in the eight round of the E-Services-sponsored Portmore Division Two Football League at the Racing football field, match time 1 p.m. The other three matches will be also be at 1 p.m. The games are being played early to give players and spectators the chance to attend Jamaica's friendly international match against Canada which begins at 6 p.m. The other three matches pit second-place Christian Pen (14) versus third-place Watson Grove (nine); Westport (seven) tackle Braeton United (four) at Ferdie Neita Park; and Hellshire United (five) welcome Hamilton Gardens (six) at Christian Pen. Racing and Christian Pen have already qualified for the mid-season final at the Passagefort field next Sunday.

The inaugural Colin Fagan-sponsored Leander Marshall/Portmore U-13 Football League will continue this afternoon with four matches.

Cumberland and Passagefort, winners of their opening games two weeks ago, will clash in the key encounter of the round at the Cumberland playing field at 1 p.m. In other matches, Portsmouth host Daytona at the Portsmouth football field at 1 p.m., while a double-header is scheduled for the Passagefort field. In the opening game at 1 p.m., Arlington take on Waterford. In the feature match at the venue at 2:45 p.m., Wanderers, on a high following a 3-1 victory against Waterford last Saturday, battle Ascot.