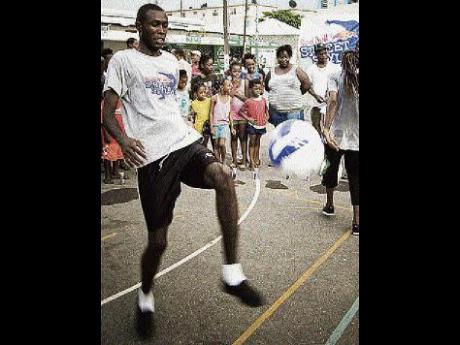 Contributed
Residents look on as Aaril Anglin (left) and Aquel Fonseca (back to camera) juggle the ball, during an exhibition in Tivoli Gardens on Friday, January 15. The two, main competitors in the Red Bull Street Style competition, will be among the leading contenders at Emancipation Park today.

Sixteen of Jamaica's best 'keeping up' ball artists will battle against each other for the coveted National Red Bull Street Style championship title at Emancipation Park today, beginning at 4 p.m.

The main prize: an opportunity to compete in the world finals in South Africa in April, just prior to the World Cup.

Headlining the list of competitors is defending champion Aquel Fonseca, who represented Jamaica in 2009 in the Red Bull Street Style finals in Brazil.

However, he will be faced with fierce competitors such as Aaril Anglin, who has been seriously training and will prove, like others, to be true competition.

'Keeping up' is not a new pastime for many Jamaican footballers, but the Red Bull Street Style competition has taken football to a whole new level of ball control, creativity and skill.

It incorporates all facets of football and shows an athlete's full control and skill with the ball and also encourages participants to use their own style of 'juggling' in the most artistic ways.

A more creative and comprehensive form of what Jamaicans call 'keep up', Street Style allows the players to do almost anything creatively with the ball, just as long as the player does not use his/her hands to control the ball and does not impede or obstruct the opposing contender at any time.

A battle comprises two players squaring off against each other in a three-minute session to showcase their football skills. Players are given the ball for 20-second intervals within a three-minute period and during the battle both the ball and the competitor must stay inside the competition area, a circle measuring seven metres (23 ft) in circumference. The winner of the battle advances to the next round.

André Virtue, who is well known within the football arena locally and will be among the judges, is pleased with the excitement shown so far for the competition.

"Jamaican footballers have a natural way with a football and that coupled with our style and creativity will make us strong contenders on the international scene again," he said. "The national finals on Saturday will bring skill and talent to the fore."

Judges for this event will include members of the local sporting media and entertainment fraternity.

In 2008, 45 countries worldwide took on the challenge by sending the winners of their respective national finals to the world finals in Brazil, the spiritual home of the beautiful game.