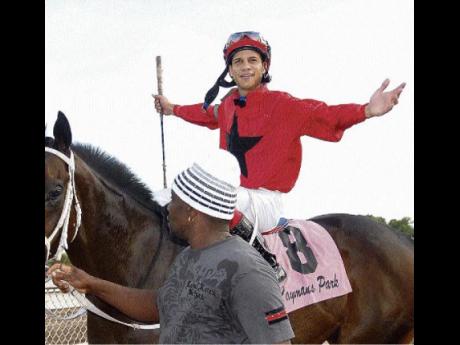 Colin Hamilton/Freelance Photographer
Panamanian jockey Dick Cardenas aboard the 8-5 favourite MEELO is all smiles en route to the winners' enclosure after his fighting victory over the Omar Walker-ridden BULLET LINE in the sixth race at Caymanas Park on Wednesday. Trained by Richard Azan, MEELO won the 1100-metre race by a short head.

Top sprinter AHWHOFAH makes her seasonal debut at Caymanas Park today when she takes on six opponents in the Abe Issa Memorial Cup over 1200 metres, feature event on the 10-race programme.

The classy native bred filly SAINT CECELIA, HONEYOFALADY and AHWHOFAH are out for the first time since occupying the first three places, respectively, in the December 5 CTL Gold Cup over 1400 metres.

In the Gold Cup, the then lightly weighted SAINT CECELIA made all, holding on grimly by half a length from the fast-finishing HONEYOFALADY, with AHWHOFAH finishing another 2 1/2 lengths away third under top weight of 60.5kg with Shane Ellis up. The trio hold the key to the outcome of today's race.

Apart from SAINT CECELIA, the Dwight Chen-trained HONEYOFALADY also holds a victory over Wayne DaCosta's AHWHOFAH, this when leading home the reigning champion sprinter by 1 1/2 lengths in the None Such Sprint over 1200 metres on October 17 last year.

It should be close among the three principals, but one thing is sure: the speedy SAINT CECELIA from the stables of Spencer Chung will have to be caught from the convenient mark of 50.0kg and competent 3.0kg claiming apprentice Aaron Chatrie aboard.

Prior to winning the Gold Cup, SAINT CECELIA chased shock winner HOMBRE to the last furlong in the ADL Superstakes over 2000 metres before weakening into sixth place, but had earlier turned heads with an impressive fast-time victory in the Seek Exercise Book Trophy race over 1300 metres on August 29.

She covered the distance in the smart time of 1:17.2 behind splits of 22.4, 45.2 for the first half-mile and given her capabilities, a fit SAINT CECELIA can take home this trophy.

AHWHOFAH and HONEYOFALADY will be coming at her leaving the furlong pole and I am expecting the proven class of AHWHOFAH to prevail with the distance just perfect.

The five-year-old mare by Royal Minister out of Executive Profile has worked well and being no stranger to big weights, should get there in the nick of time with champion jockey Omar Walker, her customary pilot, back in the saddle.

She is taken to win narrowly from SAINT CECELIA and HONEYOFALADY.

I also like THE VALIDICTORIAN in the first race; DR. STEPHANIE in the fifth; BIG DIVA over BELOW THE WAIST in the knotty sixth race; SUGAR'S IMAGE in the seventh; and SPIRITUAL CHOICE over RUN SMILE RUN in the nightpan.