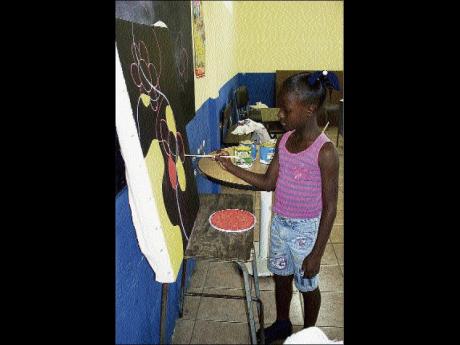 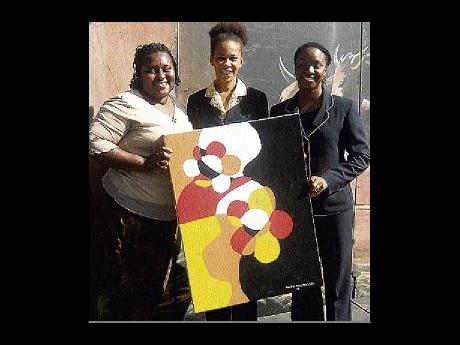 A student adds her touch to the painting. - Contributed photos

Approximately 60 of 100 students of Allman Town Primary recently presented a painting, which they did for the Bank of Jamaica (BOJ) on Friday, January 22.

The painting was done during a hands-on workshop by Jamaica Guild of Artist member Melhanie Spence with material donated by Berger Paints and Whistling Frog. They were all participants at the creative-workshop series titled 'The Critical Role and Impact of the Arts', hosted by the OAaSIS International Foundation from January 13 to 22.

The creative series are being held to empower the creative mind of today's youth through schools, especially where there are no formal teachers assigned to teach the arts. Allman Town Primary principal Kandi-Lee Crooks-Smith had been appealing for over a year for assistance with arts training at her school. At one time, she noted that even drama classes were being held under a tree, and that the school operated without art and music teachers who, she felt, were critical in the development of a child. During the closing ceremony, Crooks-Smith said OAaSIS was the only group of persons to have given physical assistance, as everyone else only committed verbally.

During the workshop students were made more aware of their abilities and learned how to be creative in all areas of life for success and careers within the arts field. On Thursday, January 21, Spence, a painter herself, first gave the participating students a crash course on primary and secondary colours. Then after teaching the students about murals and paintings, she guided them in creating a design for their painting on canvas for the BOJ in recognition of their work in exposing varied art expressions and practitioners. In teaching them about abstract art, she guided them into making their subject "seem to disappear" and creating illusions with paint.

The BOJ's artwork was titled Colour Harmony. An abstract of flowers in nature, the concept was a combined effort including Spence and the students. Spence started with one line, and then made the students combine their total experience to make the flowers seem to disappear into the painting, thus creating an abstract piece. To create the design of the painting, two simple childlike flowers are joined together by curved lines. The painting is done in black, red and yellow.

The workshop featured more than 30 presenters included journalists, painters, videographers, businesspersons, publishers, authors, musicians and singers. Although all sessions were impacting, Farenheit, Jermaine Gordon, Peter Lloyd, Spence and the mural, Reiko Nagase and Kemarch 'Wizad the Magician' Dodd were among the more popular.

At the closing ceremony, the painting was handed over to BOJ staff members Sandra Moodie and Ellan Neil. The day ended with a challenge to the students to get an education and to practise their skills plus performances by artistes Sophia Brown, Ce'Cile, Chris Martin and Iyah Shine.

Teacher Lorette Griffiths (left) hands over 'Colour Harmony', done by the students, to Bank of Jamaica representatives Sandra Moodie (centre) and Ellan Neil. The presentation was made after the bank's representatives awarded certificates of participation to the students.