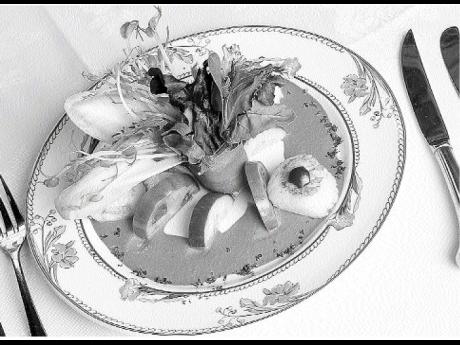 Sandra Campbell did not go to finishing school in Switzerland, nor did her mother take her to Miss Manners' etiquette classes.

In fact, she had not gone beyond grade five at all-age school. Most of what she knew she had learned on the streets of her inner-city community where she was born and bred, and still lives. The 26-year-old mother of six children sold in an arcade in downtown Kingston to make ends meet. She met Sheila Tavares on a flight from one of her shopping trips. They became instant friends and chatted on the phone regularly. Sheila loved Sandra's down-to-earth personality and had been promising to invite Sandra for dinner, but it never happened until last Christmas Eve. Sheila would pick her up in Half-Way Tree.

When Sheila reached the bus stop she nearly didn't stop, but Sandra saw the car and stepped down from the sidewalk. The bus stop was crowded and everybody stared at Sandra as she opened Sheila Tavares' posh car door. Sandra looked back at the gathering before she plopped into the front passenger seat. As the car pulled away, she glanced and smirked at the onlookers.

"Was there an accident?" Sheila asked, after taking a quick look at Sandra.

All the way to Cherry Gardens, Sheila struggled between what her friends would think about Sandra and the scent coming from the spray that Sandra used on her blonde wig. Sandra chewed gum loudly and fondled the multi-coloured plastic bangles that almost reached her elbows. Not much was said between them as Sheila was nervous. She broke two red lights, to which Sandra blurted each time, "Yuh nuh fraid dem lock yuh up!?" Sheila didn't respond, and Sandra caressed her bangles.

When they reached Sheila's home, as soon as they exited the garage, Sandra was first up the stairs, her pink rubber slippers hitting the steps loudly. She kicked off her flip-flops when she landed on the veranda. "Mi nuh waan dutty yuh floor, it pretty sah!" she exclaimed.

Sheila wished the world would end. She nevertheless escorted Sandra into the dining room where four of her friends were waiting. They rose to greet Sandra, glancing at one another in the process. After the brief and uneasy introductions, Sheila summoned the helper to serve the meal, and took a seat beside Sandra.

Food was now served and Sandra, using the same fork for each course, ate to her heart's delight. The other women tried to small talk with her but she preferred the good food to talking about herself. When she was finished gorging, she put away her wine glass and asked for a glass of carrot juice. There was no such juice but she still requested a 'different glass'. It was delivered and she filled it with non-alcoholic sparkling grape beverage. As she drank, her belly rose, and rose. When she was through to the last drop, she removed a small white rag from her bosom and wiped her mouth vigorously. She tucked it back when she was finished. The women pretended not to be looking. Then the belch came, as Sandra's digestive system went into overdrive. She suddenly stood and asked for the toilet. Sheila shot up and said, "Come along, dear." Sandra was right behind her. After about 30 minutes, Sandra re-appeared only to find an uncomfortable-looking Sheila at the table.

"Oh, they have another social and they had to go," Sheila replied, trying to muster a smile. "They said it was nice to meet you."

"A nuh nutten," Sandra drawled as she looked around and inspected the surroundings.

"And you know, I have to join them soon, so let me drop you off, and get back to freshen up," Sheila said as she grabbed her keys.

"Memba the food in the file paper," Sandra shouted to the helper.

By now they were on the veranda. The slippers were back on Sandra's feet and the helper handed her the silvery package. As Sheila quickly descended, she asked, "So, how was it?"