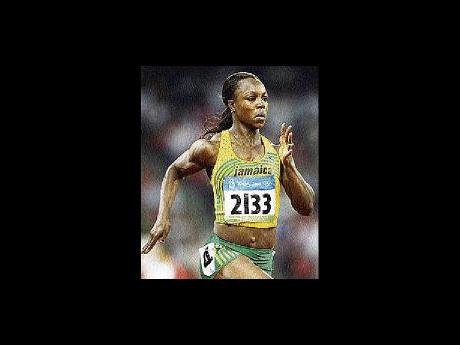 On a cold night at Madison Square Garden, Jamaican Sheree Francis gave the Caribbean its only victory of the championship when she captured the high jump with a mark of 1.88 metres.

Campbell-Brown, meanwhile, posted a time of 7.24 seconds as she finished a close second in the women's 60 metres sprint.

The Jamaican finished quickly but ran out of space and time to overhaul resurgent American Lisa Barber who reached the finish in 7.23 seconds to claim the victory. Two-time Olympian Muna Lee of the United States took third in 7.25 seconds.

"This is my first race. I'm not too happy with the time, but I was up against the best in the world and I wanted to get a win," said Barber who is coming off injury.

The 21-year-old Brathwaite clocked 7.61 seconds in the 60 metres hurdles to finish behind American Terrence Trammell, who crossed the tape first in 7.49 seconds.

"I'm happy with the win. I did expect to run just a little bit faster," said Trammell, who finished second at the Berlin World Championships behind Brathwaite.

Guyana's Aliann Pompey also had to settle for the runner-up position as she too finished second in the 400 metres.

The 31-year-old Pompey clocked 55.19 seconds and finished handily behind American Monica Hargrove who posted 55.07 seconds to win the event.