HAITI - Baptists may face trial in US 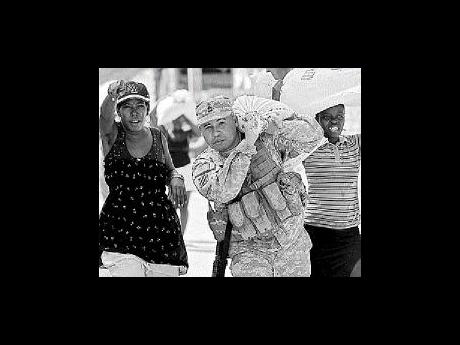 United States Army Sergeant First Class Pierre, of the 82nd Airborne Division, carries a sack of rice for a woman during food distribution by an aid organisation in Port-au-Prince on Sunday. Relief workers prepared for a woman-only food-distribution system in Haiti's capital, launching a new phase of what they hope will be less cut-throat aid distribution to ensure that families and the weak get supplies following Haiti's devastating January 12 earthquake.

Haitian officials said yesterday they are thinking of sending 10 United States Baptists to the US for prosecution after they were arrested trying to take 33 children out of the country without government permission.

Officials said they hoped to quickly resolve the case while also sending a strong message that child trafficking will not be tolerated.

Haiti's communications minister, Marie-Laurence Jocelin Lassegue, said Haitian and US officials were discussing the idea of trying the Baptists in the United States because Haiti's court system was crippled in the devastating January 12 earthquake, which destroyed the justice ministry building and killed many government officials.

Since their arrest last Friday near the Dominican border, the church group has been held inside dingy concrete rooms in the same judicial police headquarters building where ministers give disaster response briefings. They have not yet been charged.

A lawyer representing them alleged yesterday that they were being treated poorly and that one of them, a diabetic, fainted and was hospitalised. Attorney Jorge Puello, in the Dominican Republic, said they weren't being given adequate medical care and food.

While the US Baptists said they were only trying to rescue abandoned children from the disaster zone, investigators were trying to determine how the Americans got the children, and whether any of the traffickers that have plagued the impoverished country were involved.

Aid workers who interviewed the children said some have surviving parents, and that some were desperate to be reunited with their families. The Baptists' Haitian Orphan Rescue Mission was described as an effort to save abandoned, traumatised children. Their plan was to scoop up 100 kids and take them by bus to a 45-room hotel at Cabarete, a beach resort in the Dominican Republic. The 33 kids ranged in age from two months to 12 years.

They were stopped at the border for not having proper paperwork and taken back to Port-au-Prince, where the children were taken to a temporary children's home.

Foreigners adopting children from the developing world have grabbed headlines. Recently, Madonna tried to adopt a girl from Malawi amid criticism from locals, while Brad Pitt and Angelina Jolie have a burgeoning multicultural brood.

But in Haiti, a long tradition of foreign military intervention, coupled with the earthquake that destroyed much of the capital and plunged it even deeper into poverty, has made this issue even more emotionally charged. Of 20 Haitian parents interviewed in a tent camp by the AP on Sunday, only one said she would not give up her children to give them a chance at a better life.