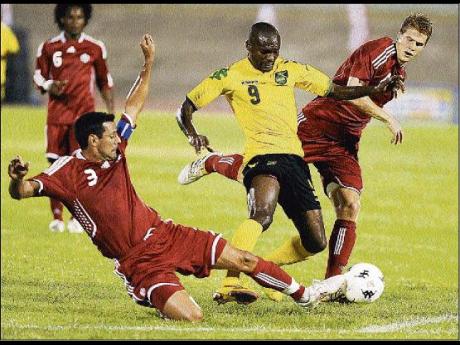 National head coach Theodore Whitmore was full of praise for his local-based charges after leading his Reggae Boyz to a workman-like 1-0 victory over Canada in their friendly international inside the National Stadium on Sunday night.

The likes of Devon Hodges (Rivoli), Navion Boyd (Tivoli) and Jermaine Taylor (St Georges) were some of the more impressive locally based talent and Whitmore is hoping that his cadre of Digicel Premier League (DPL) stars will continue their good form when the Boyz tackle Argentina in their next assignment on February 10 in Mar del Plata, Argentina.

Whitmore said: "It's the start of our 2014 campaign and we wanted to give some new players an opportunity. That is why we pulled out some of the more experienced players towards the end (of the game) because we wanted to see how they (local players) would respond in the game.

"We have a big game in a short while against Argentina and they will be used, so it's good that they are showing good signs," he added. "Now they have to continue."

The former midfield maestro will not be able to call on some of his more experienced overseas-based players for the Argentina friendly, due to their commitments with their respective clubs. He is, however, confident that those at his discretion will be able to give a good account of themselves and represent the country well.

"Most of our overseas players won't be available so we will have to use most of our local-based players, but I think they are up for the challenge. It's a big test for them," Whitmore shared. "I have no doubt about the talent here in Jamaica. We wanted to look at a number of players but it's just a matter of time, everyone who deserves a chance will get it."

Norwegian-based striker, Luton Shelton, scored in the 68th minute to lead Jamaica over the Canadians in what was the 17th meeting between the two countries and the sixth since 2006.

Whitmore was happy with his team's performance over the 90 minutes and credited it to the hard work they had done in preparation for the encounter.

Whitmore said: "It was a spirited performance from both teams, but we deserved the win. The boys have been working hard for the last three weeks and we definitely deserved to come out on top."

Several changes to the squad will be announced shortly, with the players scheduled to reconvene after tomorrow's round of DPL games. They will stage two training sessions here at home before departing for Argentina.