Hockey to get centre of excellence 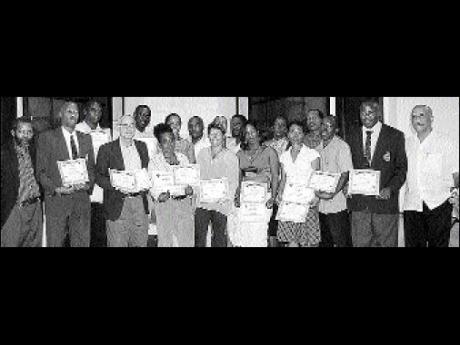 Participants from the Jamaica Hockey Federation (JHF) Level One coaching course display their certificates at the presentation ceremony, at the Petroleum Corporation of Jamaica building on Friday. At right is JHF president Victor Tomlinson, while Maurice Westney, G.C. Foster College's acting vice-principal and head of physical education, stands at left. - Contributed

G.C. FOSTER College's acting vice-principal and head of physical education, Maurice Westney, says the institution is looking to establish a centre of excellence for hockey by September.

Speaking at the first-ever Jamaica Hockey Federation (JHF) level one coaches certification awards ceremony last Friday at the Petroleum Corporation of Jamaica (PCJ) auditorium, Westney said the centre of excellence would cater to the training of players, coaches, match and administrative officials, as it seeks to develop and reinvigorate interest in the sport.

"We are hoping that by September, just in time for the new academic year, a centre of excellence for hockey will be established," said Westney, to huge applause at the function.

"We'll be targeting the various stakeholders, as we seek to rebuild and develop the sport, so as to make us more competitive and regain our status as one of the region's best, as was the case in the 1970s and 1980s," he said.

The centre of excellence would be the second such venture of the institution following the establishment of the George Headley Centre of Excellence for cricket five years ago.

The George Headley Centre of Excellence, which was primarily funded by the Jamaica Cricket Association, has, however, been dormant in recent years due to a lack of finance.

Westney also noted that with the Jamaica Football Federation utilising its concept in the creation of their football academy, they were also hoping to develop centres of excellence for other key sports, such as netball and basketball, in the not-too-distant future.

Meanwhile, 20 coaches were presented with certificates for completing the level one course, which was held last summer, under the tutelage of International Hockey Federation instructor, Niall Sturrock, of Scotland, his wife, Lizzie Sturrock, and his assistant, Guyana's Phillip Fernandez.

The course was funded by the Olympic Solidarity Movement.

"It's the first time we have had a graduation exercise, a unified coaching programme and we at the federation are proud," said JHF president, Victor Tomlinson.

He added: "I am happy it took place as it has been a long time coming, and I hope it will be the start of great things to come for the sport."

The JHF, meanwhile, plans to hold more Level One courses in the near future and a Level Two training course later this year.