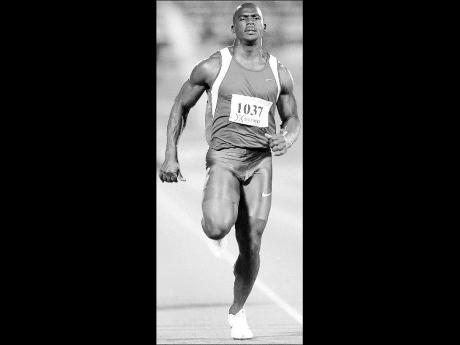 Nesta Carter sprints to victory in the men's invitational 100m event at the Grace Jackson/ Queen's track and field meet at the National Stadium on Saturday. - File

The Queen's School's Diandra Gilbert was the notable double winner at last Saturday's Grace Jackson/Queen's Invitational track and field meet, which started at Stadium East and ended inside the National Stadium.

On the senior side, Nesta Carter stole the spotlight with a 10.15 clocking.

Two of the top drawing cards, former 100m world record holder Asafa Powell and 100m hurdles world champion Brigitte Foster-Hylton, did not run as the meet started well behind its scheduled start time and was delayed throughout with several heats.

In the girl's section, The Queen's School dominated, with Diandra Gilbert (24.72) taking Class One ahead of Tashana Francis of Excelsior (25.58); Danielle Williams ran away with the Class Two event in 25.22 ahead of Glengoffe High's Natasha Morrison (25.27); and, Chanile Bonner was the Class Three winner in 25.88.

Gilbert completed the double when she stopped the clock at 56.16 in the Class One girls' 400m, beating Oberlin's Kerri-Kaye Lamb (57.21).

Yvonna Grant, with 59.36, was the only sub-60 seconds girl winner in the Class Three 400m event, while Glengoffe High's Natasha Morrison clocked 58.35 in Class Two to beat Oberlin's Anna-Kay McCallum (58.89).

In the boys' 400m, St Jago's Vaughn Fonglyeiquee ran 49.92, the only sub-50 seconds timing, to win the boys' Class One 400m; Kevon Robinson of Foga Road High was impressive with his 50.46 clocking to take the Class Two race ahead of Greater Portmore's Junior Bramwell (50.92); while Ivan Henry of St Jago High, who ran under the banner Monk Street Boys, topped Class Three in 52.97 ahead of Wolmer's Jordan James (53.10).

KC's Clive Pullen, competing for Fortis International, took the boys Under-17 high jump with a leap of 1.90 metres.