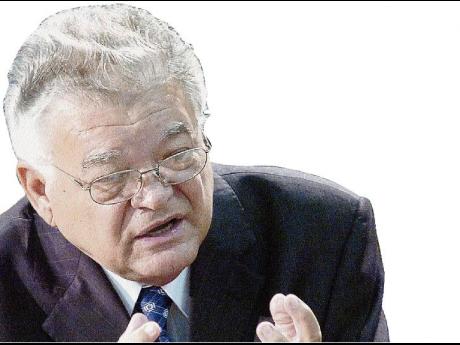 Karl Samuda, Minister of Industry, Investment and Commerce, defends the uptown relocation of Factories Corporation of Jamaica as a cost-saving move. - File

While other Government agencies have been instructed by Prime Minister Bruce Golding to move downtown, the Factories Corporation of Jamaica (FCJ) has just rested space in the ultra-busy New Kingston business district, bucking the trend.

But industry and commerce minister, Karl Samuda, is defending the move, saying it will save taxpayers $1 million.

The agency, which oversees some 175,000 square metres of factory space and 44.5 hectares of vacant lands owned by the Government, is moving its headquarters from King Street to Knutsford Boulevard.

"Factories Corporation operating downtown was paying, when we compared the rental, over a million dollars more than we could use the facility on Knutsford Boulevard for," said the minister.

Samuda explained that he was in the process of consolidating some agencies under his ministry under one roof. The ministry's office is also in New Kingston, but its operations are split between St Lucia Avenue, on a building owned by the National Insurance Fund (NIF) and Knutsford Boulevard, where its accounting and human resource departments are domiciled.

The St Lucia property is often referred to as the 'Air Jamaica building' because the airline operates a booking agency there and its name is prominently displayed.

The HR staff, however, is to be transferred to the NIF building where, Samuda said, he has acquired an additional floor for the ministry.

"So, the decision was taken that, in that situation where we had a lease, where we occupied the premises on Knutsford Boulevard, (we could) save one million dollars a year," the minister said.

"I make no apologies for that."

FCJ is paying $6.4 million per annum for the King Street location, which it rented from another state agency, the Urban Development Corporation.

"This will allow for a saving of $1.2 million per annum. It should also be noted that the office space at the New Kingston location would be two times the size of the King Street offices," the ministry said in emailed responses to Wednesday Business queries.

On Tuesday, the FCJ said it was in the process of moving and should be fully ensconced in its new home within two weeks, around mid-February.

Opposition spokesperson on industry and commerce, Senator Mark Golding, is critical of the move.

"To put it mildly, a move uptown by the Factories Corporation of Jamaica appears inconsistent with the spirit of the times, and, on the face of it, an inexplicable departure from the Prime Minister's express commitment to cutting the costs of providing public sector entities with office space," he said.

Samuda, however, hit back by challenging that there was no facility downtown to house the offices and agencies of the ministry of industry investment and commerce.

"If anyone knows of any place that we can find 25,000 square feet to house our entire ministry downtown, as minister, I would be the most happy person to accept that accommodation," he said.

He adds that there would be more relocations for some of the 20 agencies under his portfolio.

For example, the Jamaica Intellectual Property Office and the Anti-Dumping and Subsidies Commission are to take up space on the Jamaica Trade and Invest (JTI) building on Trafalgar Road, which the ministry owns.

"Both agencies will now complement the activities at JTI," he said.