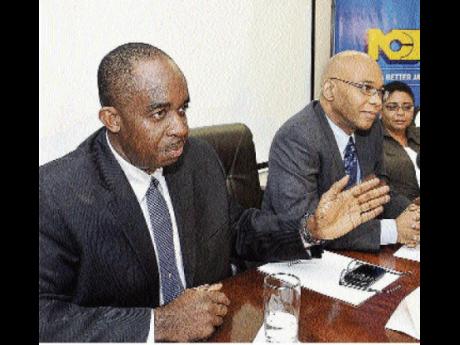 National Commercial Bank of Jamaica (NCB), having boasted more than 16 per cent gain in first quarter profit, is already bracing for fallouts from the Jamaica Debt Exchange (JDX) programme.

But the company has already confirmed it will be raising fees as one of the offsets for the JDX and the increases in GCT that is priced into its fee structure; and has got more brazen in its fight for new loan share, kicking off with a 16.95 per cent car loan that is now the cheapest in the market.

To mollify customers, the bank is also promoting the use of its electronic banking services - some of which are free of fees.

NCB has not disclosed just how much it stands to lose in investment income from the JDX, but it will be exchanging as much as $88.8 billion worth of domestic bonds - J$80 billion and US$98 million - representing 28 per cent of total assets.

"We have modelled quite extensively the impact from the JDX programme on the future profits of NCB and having gone through that exercise, it will have a negative impact on our income - a diminution in our top line revenue," NCB Group Managing Director Patrick Hylton said Friday.

"From a number of initiatives that have been implemented and new strategies to be pursued we expect to remain very profitable and expect strong levels of capital and liquidity," he said.

The offer closes today, of February 3, and the trades become due for settlement February 16.

First quarter profit for the banking group climbed 16.3 per cent or by $388 million to $2.8 billion, but contracted $130 million relative to the September 2009 quarter.

NCB closed out its 2009 fiscal year in September with full-year net profit of $10.2 billion.

Hylton is already sharpening his scalpel for more cuts to expenses, which in the December current quarter crested $4 billion.

Fee and commission income, where NCB is aiming to leverage revenues, netted $1.4 billion for the quarter. The segment provided income of more than $6 billion in the 2009 year.

Balance sheet growth was fairly robust: assets grew 8.6 per cent or $24.8 billion to $313.4 billion; net loans rose 4.5 per cent or $3.8 billion to $87.9 billion, and the banking group's capital base climbed to $42 billion, with risk-based capital ratio at 15.3 per cent, which the bank pointed out, exceeds the minimum requirement of 10 per cent stipulated under the law.

The wealth management arm of the bank, led by NCB Capital Markets, continued its recovery contributing operating profits of $894.6 million in the December quarter, some 157.5 per cent or $547 million more than it did in the corresponding quarter of 2008 when the financial crisis was most toxic to Jamaican financial houses.

Despite allowing premium collections in the quarter under review, NCB Insurance contributed operating profits of $540.2 million.

But the bank, Jamaica's largest by assets and branch network, also had to contend with a performance slowdown in the September quarter, registering marginally lower numbers on several indicators including net profit, operating revenue, earnings per stock, returns on equity and return on assets. Net profit was 4.7 per cent or $137 million below the previous quarter.

Hylton blamed the quarter-on-quarter decline on lower foreign exchange gains, slowed premium collections by the insurance business, a 12 per cent wage increase for staff and a one-off "quasi-legal" expense paid out by its wealth management arm, NCB Capital Markets.

Pressed for details of the charge, the banker told Wednesday Business that the matter was subject to a confidentiality agreement.

With the December quarter behind them, bank officials say they are now preoccupied with fashioning and implementing measures to limit the fallout from the significant losses the group will suffer from the JDX which will extend instrument tenors and lower coupon rates to an average of 12.25 per cent.

Declining to give specifics of the counter-measures, Hylton would only say that they involved efficiency improvements, cost cutting and revenue enhancement through new products and services.

Cost containment has been ongoing at the bank, the NCB officials have reminded.

"We have maintained our focus on cost management and the results shows where we are able to contain increases in operating expenses relative to increases in income," said Yvonne Clarke, NCB's group chief financial officer.