Air Jamaica to suspend some of its routes 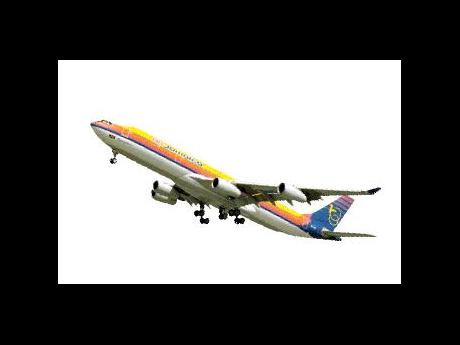 The move is expected to have a devastating impact on informal commercial operators doing business in Curaçao and Grenada, and students studying in Cuba. The news also comes days after the Government reportedly signed a non-binding letter of intent with Caribbean Airlines (CAL).

Air Jamaica will cease flights from New York (JFK) - Grenada and Jamaica - Orlando and Chicago as of April 12, stated a media release yesterday from the airline.

"This fleet reduction has become necessary as we seek to meet our financial obligations; however, Air Jamaica continues to be the best choice for convenient schedule and excellent service, as we have ensured that adequate capacity is provided on our core routes," stated Bruce Nobles, CEO and president of the airline.

However, National Workers Union president Granville Valentine is not convinced by this explanation and is calling on divestment committee head, Dennis Lalor, and the Bruce Golding-led adminis-tration to come clean in relation to the deal.

"A level of secrecy surrounds this letter of intent," stated Valentine.

According to him, the template regarding the routes that were cut suits CAL's plans, putting that group at an unfair advantage.

"Initially in (CAL's) discussions, they did not want to carry those existing routes as they were not their best fit," said the union delegate.

He added that the move would leave Jamaicans with absolutely no routes. "All Jamaicans will now need non-immigrant visas to fly their national carrier, if this is allowed."

The union is also questioning the legitimacy of the US$1 that CAL is being awarded the airline for, while an offer of US$45 million from Indigo, operators of Spirit Air, was thrown out. Air Jamaica is carrying a debt burden of US$900 million.

Valentine noted that the staff at the national carrier was extremely restive.

"And if we are to continue on the path of secrecy, we can't guarantee normality in Jamaica and at the airports."

The realignment by the airline will see it operating only six aircraft: one A319, four A320s and one A321.