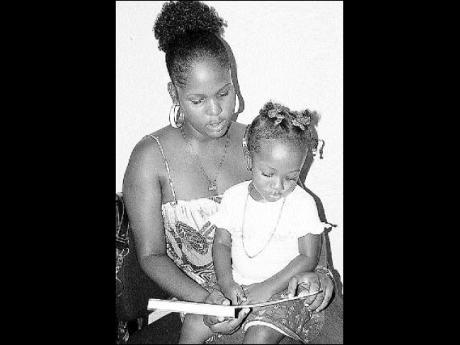 Mesha-Gay McKenzie guides her daughter, Kimeila Campbell, as they read a book together. The two-year-old has displayed phenomenal reading ability for her age. - Photo by Carl Gilchrist

When 20-year-old Mesha-Gay McKenzie decided to start teaching her then six-month-old daughter to read with the aid of a DVD she bought in Florida, along with flash cards and books, there were many detractors.

No one thought that McKenzie, who hails from Gibraltar, Moneague, St Ann, could achieve much. After all, she wasn't a trained teacher; and how could such a young child learn?

"They said it was foolishness, and mind mi burst the baby brain; a 'stupidness,' it naw work, a camera trick wha' mi see pon TV," said McKenzie during a visit to The Gleaner's office in Ocho Rios on Monday.

But she is now a proud mom. Her daughter, Kimeila Campbell, who turned two on January 23, has dumbfounded critics with her brilliance.

"Now they are surprised, everybody surprised - and happy! I started her at six months, at nine months she started to recognise words. Now she can read, name the president (US), the prime minister (Jamaica)," McKenzie explained.

She said Kimeila also knows letters, numbers, body parts, and letters of the alphabet, if you write them. For the record, she is also a good dancer.

"And she doesn't play with toys, she plays with books. I have to read to her every night, or else she not sleeping," McKenzie stated. "And the only cartoon she watch is Dora (the Explorer)."

So after that glamorous résumé, it was time for the real test. Could two-year-old Kimeila really read?

At first, she was shy and wouldn't open her mouth, despite urgings from her mother.

But after about half an hour of coaxing, which involved bribing her with some bonbon, as well as some of Mom's lunch, she finally seemed comfortable enough to speak.

With each flash card shown - even after shuffling them - Kimeila recognised and called correctly.

Little Kimeila also has a cute sense of humour. Her mom pointed to the word 'cat', and instead of calling the word, she simply said 'meow', and burst out laughing.

When she was given a book to read, she began reading correctly: "Dear Santa, please bring me a puppy for Christmas, a little white puppy, a puppy with a tail ... ."

McKenzie said the routine for Kimeila is watching the 15-minute DVD twice per day. In-between, she would show the flash cards with words written on them, and read a book to her. The books McKenzie currently reads to her daughter: My Favourite Stories for Girls, Amazing Life of Jesus, Bedtime Stories, and some Sesame Street books.

McKenzie said: "I took her to the basic school in the community and the teacher was teaching the kids off the alphabet chart and she (Kimeila) recognised everything on it. So the teacher said, when she comes, she don't know what she going to teach her."

Little Kimeila is set to begin formal schooling in September - or maybe next January.

In the meantime, her mom might well be advised to invest in a book store!