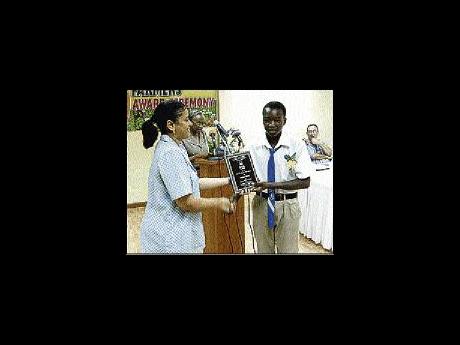 As the country continues to record growth in some sectors of the agriculture industry, more than 40 farmers in Clarendon were awarded last week for their hard work in feeding Jamaicans.

The farmers, who were feted by the Rural Agricultural Development Authority (RADA) Clarendon parish office at the Juici Patties complex, Clarendon Park, last Thursday, not only walked away with attractive awards, but had praises heaped upon them by Minister of Agriculture and Fisheries Dr Christopher Tufton.

Tufton said they deserved the accolades for their efforts in facilitating agricultural expansion in the parish of Clarendon, which contributed eight per cent of national farm production.

"We fail to recognise efforts, and recognition, sometimes even more than money, is the greatest motivator for continued efforts," Tufton told the farmers in his address.

He urged the farmers to understand the moneymaking potential of the sector, and not treat it as a mere pastime.

Tufton called on the awardees to go into their various communities and encourage more persons, especially young people, to help expand agricultural production.

In the meantime, Al Powell, chief executive officer of RADA, said there was currently a drive to train Clarendon farmers in modern techniques.

The number of extension officers has been increased from six to 13 to give farmers easier contact with personnel from RADA's Clarendon offices, he revealed.

Powell said other efforts made to improve agriculture in Clarendon include marketing programmes, the implementation of a tractor programme; loan-facility programmes for the more than 22,000 farmers in the parish to access loans; the improvement of irrigation support for farmers with the commissioning of a new pump at Ebony Park; a drip-irrigation system which supports 88 acres, among other initiatives.