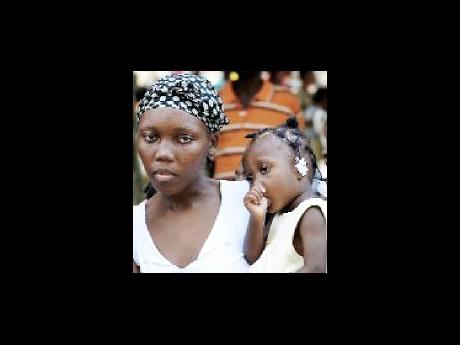 A Haitian woman waits with her child to collect supplies from a Jamaica and United Nations team in the quake-battered capital, Port-au-Prince. - Ian Allen/Photographer

"Based on information received from our SOS colleagues in Haiti, one SOS child has died," Wint said. "We are, therefore, in mourning."

SOS Children's Villages in Haiti, which began in 1979, has over the years been providing a secure family environment for a significant number of orphans.

A magnitude-seven earthquake destroyed much of Haiti's urban infrastructure, particularly in Port-au-Prince, on January 12, leaving hundreds of thousands dead and about one million people displaced.

Indicating that children were particularly vulnerable during this period, Wint said the regional office has a team on the ground in Haiti managing an emergency relief effort for the children. There are two SOS Children's Villages in Haiti - one in Santo and the other in Cap Haitien.

SOS Children's Villages Jamaica is asking Jamaicans to make donations to the Haitian cause to Scotiabank account 600573, islandwide.

SOS Children's Villages operates two homes in Jamaica - one in Stony Hill, St Andrew, and the other in Barrett Town, Montego Bay.