Synchronised team off to Minnesota 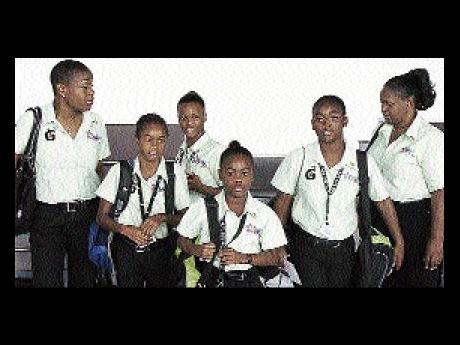 The Jamaicans are participating at the Invitational to enhance their preparations for the 25th staging of the Carifta Swimming Champion-ships, which will be held here starting on Saturday, April 3.

At the meet in Minnesota, the swimmers will be competing solo and duet events.

"It is equal to the Carifta in terms of standard and will present a good opportunity for the girls to gain valuable experience ahead of the championship," said team manager, Diahann Campbell, who along with girls departed via the Norman Manley International Airport.

"We wanted to have our full squad of 18 swimmers to participate in the meet but due to school exams and a lack of adequate finance we were able to carry only four, whom we hope will represent us well," she stated.

The girls - Breann Campbell, Giselle Tucker, Monique Watson and Ahkira Brown - have been training for months and are expected to compete well.

Breann Campbell, who will compete in the 12 and Under solo category, is the only member of the team with international experience, having represented the country at the 2009 Carifta Championships and the 2008 Caribbean Islands Swimming Championship.

"I will be aiming to get a silver or bronze, or hopefully gold, as a judge came to training and said I have all the elements for a six-points and over finish, which would make me a medal contender," said a confident Breann Campbell.

Tucker, in the meantime, said she is looking forward to the experience.

"I am kind of excited, not nervous as yet. It's my first time competing at this level and I look forward to making myself, family and the country proud," Tucker said.

Meanwhile, apart from seeking medals, the team's manager said the team will participate in training workshops.

"Medals are not the only aim of the trip," said Campbell. "We also hope to get some training from members of the US national team, past and present.

"They will be there and will be holding workshops and we look forward to their training. We will also be looking to get literature, which we can use to grow the sport locally," she added.