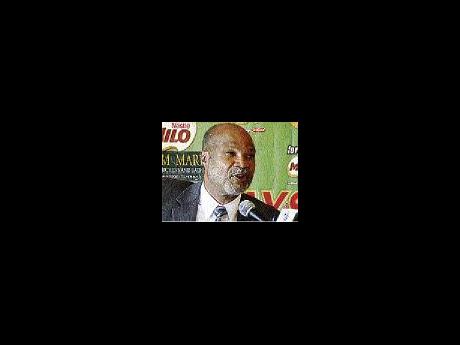 The 32nd Milo Western Relays was dealt a debilitating blow on Monday when the Urban Development Corporation (UDC) made an about turn in its earlier decision to allow the use of the unfinished Catherine Hall Stadium in Montego Bay.

"This is a most disappointing development for us because our preparations were going well," said Ray Harvey, meet director for the popular one-day championship. "I can't begin to fully explain how disappointed we are with this news."

Despite his disappointment, Harvey stated that in the interest of the athletes, who have been preparing for the meet, a decision has been taken to move the meet back to the G.C. Foster College in St Catherine, where it was staged last year when the Montego Bay facility was also unavailable.

"Going back to G.C. Foster is the last thing I wanted to do because of the great cost involved," a tearful Harvey told The Gleaner yesterday. "Some people are promising to help us out financially so we are doing our best to meet our commitment to the athletes who have been preparing for this meet."

Just under a month ago, an elated Harvey told The Gleaner that the UDC had granted permission for use of the Montego Bay stadium for the meet and that planning was at an advanced stage.

However, yesterday he stated that the UDC's general manager, Joy Douglas, who was not involved in the earlier decision, withdrew the permission that was granted.

"She is insisting that the facility is not ready and will not be used," said Harvey. "She has also made it quite clear that she is the only person who can grant permission for its use."

When the UDC was contacted for a comment from Ms Douglas yesterday, The Gleaner was told that she was out of office and unavailable. It was suggested that all queries be submitted to the agency by e-mail. However, there was no guarantee as to the turn-around time for a response.

In the wake of Harvey's initial announcement that he was granted permission to use the Catherine Hall Stadium, a UDC official told The Gleaner that the facility was 85 per cent ready. He also noted that the seating, changing room facilities and parking were now ready for use.

The Catherine Hall Stadium, which is being funded through a grant from the Venezuelan govern-ment via the San Jose Accord, has been under construction for more than a decade. Initially, it was supposed to be a 20,000-seater facility, but it has now been down-graded to just 8,000 seats.