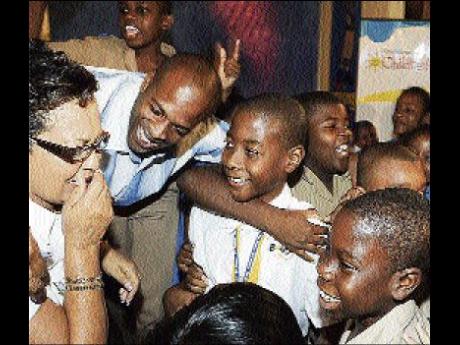 STUDENTS IN the Spelling Bee audience became restless as words like 'pedagogy' and 'judicature' were thrown around. A man's forehead became shiny with sweat in the air-conditioned ballroom and a woman exhaled with a smile on her face.

The Gleaner's Children's Own 51st Spelling Bee championship, held yesterday at The Jamaica Pegasus hotel in New Kingston, had some of the nation's brightest spellers competing against each other for the top prize.

"Them bright, eeh?" a woman said to someone sitting beside her.

The Reverend Glen Archer, coach of Wolmer's Boys' Tremaine Dixon, said, "We went through the entire Oxford Shorter (Dictionary). We did our work."

The Oxford Shorter has more than 3,000 pages.

With Dixon and Owayne Rodney (from St Thomas More Preparatory) as the final two spellers, agitated spectators began shifting in their seats. Rodney tackled a word that a member of the audience described as "bigger than (him)".

He spelled it correctly, taking a few seconds to do it, and the audience erupted in whews and sighs. Someone exclaimed, "Jeesam!"

Collective oohs and an ouch came from the audience.

Archer looked down at his lap, the corners of his mouth turned down as his student listened to the correct spelling.

Champion girl Daviesh Mills from St Hilda's High said it felt good to win that title. However, her voice was low and she wiped her face, with a sigh.

"I'm disappointed because I wanted to be in the top three," the fourth-place winner said.

There was a sharp intake of air from the audience.

"That is correct," Lai announced, and the audience seemed to explode with screams and laughter as students leapt out of their chairs, running towards the Spelling Bee champion from Clarendon, Owayne Rodney.

Dixon said he felt disappointed at first but was cheered up by his mother's words.

"Even though I placed second, as Mummy said, I'm still a champion."

E-S-C-H-A-T-O-L-O-G-Y, def. the part of theology concerned with death and final destiny.