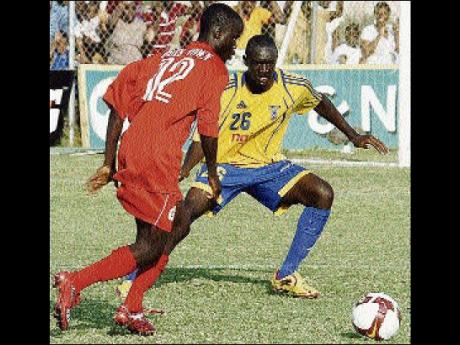 Harbour View consolidated their position atop the Digicel Premier League standings with a 1-0 win over fellow title rivals Boys' Town at Collie Smith Drive yesterday. This was Boys' Town's first home defeat of the season.

Harbour View went in search of an early goal and almost got their wish as a seventh minute 20-yard free kick by Jermaine Hue saw Boys' Town custodian, Kirk Porter, having to go full stretch to his right to tip over.

They persisted in their attacking ways and Richard Edwards' 25-yard drive had Porter beaten in the 38th minute, only for the ball to rebound off the crossbar and into the grateful hands of the keeper.

The deadlock was not broken until in the second half when Campbell collected a neatly threaded through pass from John Ross Edwards, before outrunning his marker and maintaining his composure to slot under Porter as he rushed out of the goal.

'The Stars of the East' immediately went into defensive mode and repelled waves of 'red' attacks, and their in-form keeper, Dwayne Miller, came up trumps repeatedly to protect his team's slim lead.

The 62nd minute saw the introduction of St George's College schoolboy football star, Marvin Morgan, who made an immediate impact with some slick touches. It was, however, his schoolboy counterpart, Jahmiel Hardware - also on as a substitute - who came closest to scoring when his 19-yard free kick brought another brilliant save out of Miller.

Boys' Town's coach, Andrew Price, said: "We did not mark properly and it resulted in the goal and when we got our opportunities we did not put them away."

Donovan Hayles, the coach of Harbour View, said: "I think we maintained possession well, especially in the first half. We played some good midfield combination plays and I think the goal was a well-executed goal in terms of the pass and the finishing."