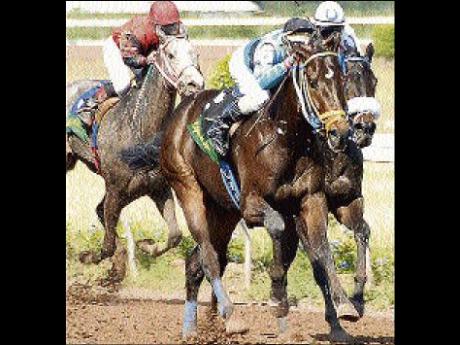 EXPLOSIVE REPORT, running at odds of 11-1 with the apprentice Richard Mairs aboard, is pushed out to win the Howard Phillipps Memorial Cup feature over 1100 metres, ahead of the subsequently disqualified MILESTONE (inside) and SHE'S MAGIC at Caymanas Park yesterday. - Colin Hamilton/Freelance Photographer

EXPLOSIVE REPORT, the least fancied at 11-1 in a field of six, won the sixth running of the Howard Phillipps Memorial Cup restricted allowance feature over 1100 metres, in decisive fashion at Caymanas Park yesterday.

However, following a stewards' inquiry, MILESTONE, under the apprentice Jodeien Anderson, was disqualified and placed fifth for causing interference to the 3-5 favourite PATARA (Shane Ellis up) at the half mile.

CONFETTI was subsequently promoted to second, enabling Subratie to fill the first two places, while SHE'S MAGIC, with female apprentice Georgina Sergeon aboard, was awarded third and PATARA fourth.

There was some controversy against the decision to disqualify MILESTONE, as it was the consensus of opinion among turfites that it was another horse who caused the interference to PATARA.

Although slowly into stride from the number five post position, MILESTONE shot past PATARA and EXPLOSIVE REPORT after the first 200 metres. The four-year-old filly was chased into the straight by EXPLOSIVE REPORT, who drew on level terms approaching the distance. After a brief duel, EXPLOSIVE REPORT gained the ascendancy early in the last furlong for a good win. By Deputy's Report, the winner is owned by Houston Stables.

This was Subratie's third win of the new season and he was happy for this.

"I am even happier that my two horses rounded off the quinella following the inquiry, but these things happen in racing.

"I thought young Mairs rode an enterprising race. I anticipated that Milestone would set off in front, so I told him to relax Explosive Report in second and mount his challenge on entering the straight. And it worked out as planned."

Mairs had a second winner on the card in the improving four-year-old filly BRASH & SASSY, who made most to win the overnight allowance sprint in fine style.

Offering odds of 9-5, BRASH & SASSY duly made it two in a row, having won over the same distance on January 23. The Burning Marque - Nuttin But Red offspring - is trained by Peter-John Scully.