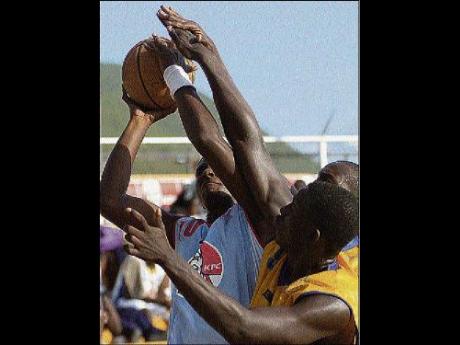 St George's College's Rasheed Andrews (left) is challenged as he looks to shoot the ball over Ardenne's Warren Honeywell (foreground) during Game Two of their ISSA/KFC Under-16 basketball final at the National Stadium courts on Monday. Ardenne won 40-36. - Ricardo Makyn/Staff Photographer

Ardenne defeated St George's College 55-48 in Game Two on Monday at the National Stadium Courts to win the best-of-three series 2-0.

"This one really feels good because the boys had to work very hard for it," said Barrett.

"I am delighted with the way they played today because this was a much closer game than the one on Friday," he added.

Ardenne began the match confidently and established a 32-25 lead at half-time.

The champions outscored St George's (16-13) in the third period through Gage, who netted seven points in the period, as Ardenne extended their lead to 48-38.

However, St George's rallied in the fourth quarter to cut the deficit to 52-46 with less than two minutes remaining through their Manning Cup midfielder, Kemar Cummings, who hit six straight points.

But Williams drained a three-pointer in the final minute of the match to kill off St George's hopes.

Cummings ended the match with a game-high 19 points.

'We tried our best'

"I think that they put more fight in their game as opposed to the last game," said Brown. " I am very pleased that these guys reached so far because we lost seven of the players from last year's team that won the all-island championships," Brown added.

Both teams will now turn their attention to the all-island cham-pionships, which begins next week.

Meanwhile, Game Three of the Under-16 final between both teams will be played on Friday at the same venue.

The match was originally scheduled for Tuesday but was postponed because of heavy rains.

Ardenne levelled the series at 1-1, following their 40-36 win over St George's College on Monday.