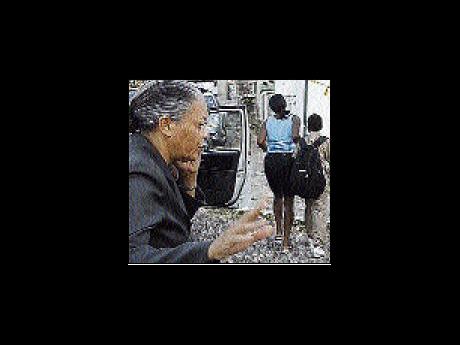 Police personnel on the scene of yesterday's massive gun and ammunition find in east Kingston were unanimous in their condemnation of the sergeant arrested in connection with the seizure.

"A people like him mek me get bad name," one cop was overheard saying to his colleagues.

"And when the boy dem a fire after we, it hurt me fi know say a policeman sell them the gun and bullets," lamented another uniformed cop.

"It is them mek Les Green (assistant com-missioner of police) say when policeman dead, them involved inna things," argued another policeman.

They were responding to news that a recently promoted sergeant was the first person held in the bust.

The sergeant, who is based at the Kingston Eastern Police Division, was in charge of the stores and was often detailed to collect new guns and ammunition being imported by the police force.

It's reported that he was searched when a patrol team, also assigned to the division, stopped him after he was observed acting suspiciously early yesterday morning.

The patrol team, which was made up of men all below the rank of sergeant, quickly disarmed their superior subofficer before searching his vehicle and finding a cache of guns and ammunition.

"Just shoot me and kill me. Me can't tek the embarrassment," the sergeant is reported to have said as his colleagues collared him.

But the cops were more interested in finding out who else was involved in the illegal activity and the source of the guns and ammunition.

For that, they have received commendation from acting Commissioner Owen Ellington and other senior members of the force.

The Gleaner also understands that they will be promoted today.

For now, the sergeant is the only cop in custody but, as the probe continues, other bad apples in the police force could find themselves in trouble while the hard-working cops bristle that another "squaddie" has tarnished their reputation.

More than 60 cops were arrested and charged with breaches of the anti-corruption laws last year while several others implicated in questionable activities were retired in the public interest.

At least three cops have found themselves in trouble with the law so far this year.