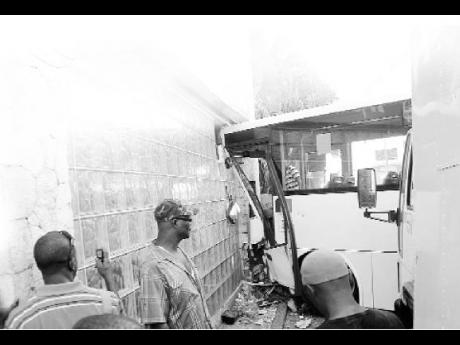 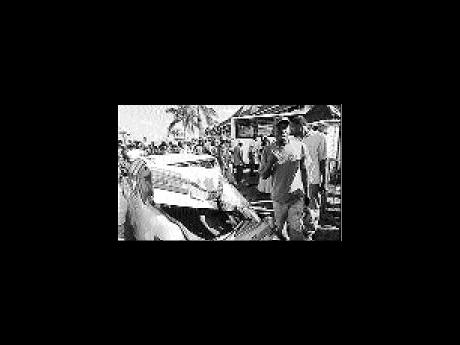 Onlookers inspect the scene at Mother's, in Half-Way-Tree, where a Jamaica Urban Transit Company bus slammed into the fast-food store after developing mechanical problems. - photos by Ricardo Makyn/Staff Photographer

Just over a month ago a female Jamaica Urban Transit Company (JUTC) bus driver was hailed as a hero for her quick response to persons needing help when an American Airlines flight overshot the runway at the Norman Manley International Airport.

Yesterday another female bus driver was given similar accolades for her role in preventing any loss of life when the vehicle she was driving ran off the road in busy Half-Way Tree, St Andrew, in the morning.

Annette Howard was the JUTC bus driver who rushed to the assistance of the passengers hurt in the aircraft mishap. The driver behind the wheels yesterday, when a number-32 bus developed mechanical problems as it turned onto Constant Spring Road from Courtney Walsh Drive, did not want to be named.

"When she tek the corner the bus get out of control and start lick some cars. The bus was swinging towards the gas station and she turn it out and carry it over here so where nobody never deh," said Richard McLeod, the only passenger on the bus at the time.

"Me see people turn them back in the gas station, never know what going on and when she see she was going in there she start bawl out 'Jesus!, Jesus!'" McLeod added.

He was supported by Jennifer Bennett who watched the drama from the relative safety of the sidewalk metres away.

"Me a wait pon a store fi open and me just see the bus start move cross the road and the driver lick a car and she turn it in deh so (Park Plaza). Me rate her because, if it did go over the gas station, everybody over deh woulda dead," Bennett said.

Scores of other persons related a similar story as they recounted the scary minutes before the bus crashed into the wall of the Mother's restaurant building in Park Plaza.

The driver of one of the cars the bus had hit and another person were left nursing injuries, none of which appeared life threatening.

The JUTC later reported that it appeared the brakes had failed. However, this will not be confirmed until a full examination of the vehicle is conducted.

Pedestrians walk by a motor car damaged during yesterday's incident.