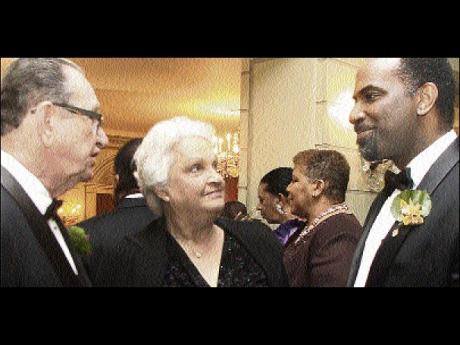 Seventeen distinguished United States and Caribbean nationals, including four present and former regional leaders who earned degrees from the University of the West Indies (UWI), were honoured by the university in New York, last week, at an annual fund-raising event for the institution.

David Thompson, the prime minister of Barbados and Tillman Thomas, Grenada's prime minister, as well as Dean Barrow, who, up to two years ago was the leader of Belize, were present at the function at New York City's Pierre hotel, put on by the American Foundation for the University of the West Indies (AFUWI).

But Trinidad and Tobago's prime minister, Patrick Manning, who, like his counterpart leaders, graduated from the UWI and were granted Legacy Awards, was hailed in his absence.

Launched 13 years ago by retired UWI vice chancellor, Sir Alister McIntyre, the annual galas are used to raise endowments for the university and to recognise Caribbean nationals and Americans who have distinguished themselves in various fields.

This year, the AFUWI awards were made across four categories: Caribbean Luminary, The Vice-Chancellor's Achievement Award, The University of the West Indies Bob Marley Award and The Legacy Awards.

Lowell Hawthorne, a Jamaican-American businessman who is founder and CEO of Golden Krust Brand;

Dr Lesly Kernisant, a Haiti-born doctor who is president and chairman of Preferred Health Partners; and