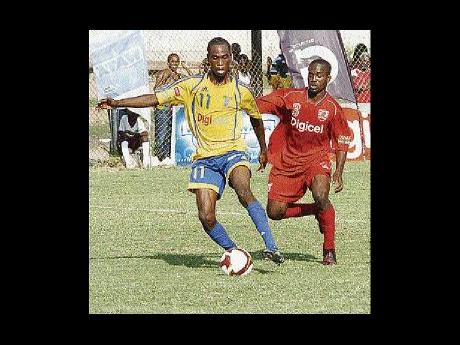 The defending champions failed to get the better of Waterhouse, who were forced to play the last half hour of the game with 10 men, following Nicholi Findlayson's ejection for a second bookable offence.

Midfield leader Steve Green and striker Navion Boyd were both forced to leave the field after suffering injuries; Green aggravating a groin injury, while Boyd couldn't continue after feeling the effects of an upset stomach that had bothered him before the start of the game.

Both teams traded efforts throughout the game, but were unable to break each other down mainly due to poor finishing by both sets of players.

Speaking after the game, Hyde Sr expressed satisfaction with the result but bemoaned the injuries to his players.

"Well, I think we played a very good game; for the whole 90 minutes we played some good football. It's a pity we had to take off Steve Green early due to a groin injury and Navion (Boyd) was vomiting from before the game. He had an upset stomach, so we didn't get 100 per cent from those players," Hyde Sr said.

The tactician was, however, able to call on the services of frontman Roland Dean who had been sidelined since late October last year.

"He (Dean) is looking good and with more games he will get better. Remember, he is short on games, so with more games, he will be back to full fitness by the middle of this round, I hope," Hyde Sr smiled.

He is also looking forward to the inclusion of Irvino English into the team, after the left back's recent transfer from Waterhouse, but also had a warning for the player.

"We also have Irvino English to bring into the mix, so we do have a competent squad, we just have to know how to place them and how to keep the discipline in the team. We don't use name footballers, you have to go out there and perform," said Hyde Sr.

Waterhouse's Geoffrey Maxwell was also satisfied with the effort of his team, adding that the result was a fair one.

"It was a good combative game because both teams wanted the three points. When you look overall on the game, I thought Tivoli had their highlights and we had our highlights; both teams played well and got their chances," said Maxwell.

The much-travelled coach insisted that his team were always hunting all three points even when they went down to 10 men.

"We didn't give up on the three points after going down to 10 men, we still decided to play our attacking game because it was three points that we really had to try and get. Overall, we don't play a defensive game, we play attacking football," Maxwell pointed out.