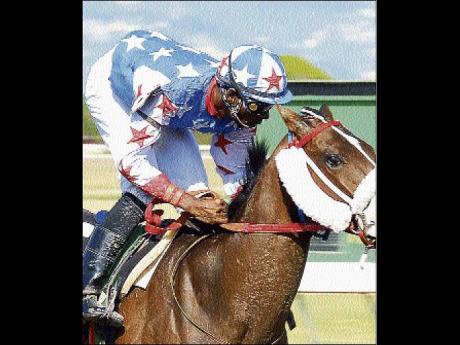 Platinum valley is eased by champion jockey Omar Walker in the closing stages of the fourth race over the straight-five course at Caymanas Park on Wednesday. - Colin Hamilton/Freelance Photographer

Having survived Wednesday's race meet, the Pick-9 continues today with $1 million still in the kitty, yet it could offer a payout of close to $2 million.

We look at the Super-6 which gets under way with a $180,000 claiming race over 1400 metres to be contested by nine starters, including SAMBA DANCER, the consistent PRODIGAL SON, LATIN KING and MEDICAL ACCOUNT.

PRODIGAL SON failed by a neck to stave off the out-of-class NATURAL HEART over 1500 metres when last raced on January 13. And three weeks prior to that, on Boxing Day, he went under to RUN ROMAN RUN in a driving finish over this trip.

Back in action on the convenient mark of 51.0kg by virtue of apprentice's Jevanne Erwin 4.0kg claim, PRODIGAL SON could bring fitness into play and go one better.

Still, LATIN KING, MEDICAL ACCOUNT and SAMBA DANCER are basi-cally better horses than him when fully sound and it is SAMBA DANCER, now taking orders from in-form trainer Ryan Darby, who catches my fancy. He won easily over 1400 metres on December 5 and has run well since.

BULLET LINE, one of several live mounts for champion jockey Omar Walker and champion trainer Wayne DaCosta on the card, should atone for her near miss to MEELO on January 27 by landing the fifth race over the straight five course. Old rival CLASSICAL BULLET, who has good speed, looks the principal danger in a field of seven.

The sixth race for the Altamont V. Armond Memorial Cup (claiming $350,000-$300,000) over 2000 metres, should resolve itself into a straight fight between the two-turn specialists MOCHACHOCOLATTE, under customary rider Dick Cardenas, and SERGEANT STONEHAN, with top apprentice Doushane Gordon aboard. Preference is for MOCHACHOCOLATTE, who is not only down in class to vie for this trophy, but has scored all three wins to date going two turns (1820 metres).

The well forward two-year-old debutante LIFEISJUSFORLIVING, with Walker riding for DaCosta, is tipped to make a winning debut in the seventh race over the round five course, this at the expense of CLASSICAL BABE. And it should be Walker and DaCosta again with the unbeaten American 4-y-o gelding CASSANOVA BOY in the eighth race over 1500 metres for the King's Plate, to be contested by nine starters.

CASSANOVA BOY has worked brilliantly, and having won his four races to date by the combined margin of 26 lengths, should extend his streak at the expense of old rival PRINCE OF PEACE, who bids for his fourth consecutive win.

The closing race for maiden and untried three-year-olds over 1100 metres should come down to a straight fight between Walker's mount MOMENT OF HOPE and WILD TRADITION (Shane Ellis up), both having worked well.

Champion jockey Omar Walker, who recently returned from a four-day suspension, has been stood down for one raceday by the stewards for careless riding aboard THE GUARDIAN in the ninth race at Caymanas Park on Saturday, January 23.

Walker was penalised for causing interference to THE BOMBER in the vicinity of the 300-metre point. His suspension will take effect on Saturday, February 13.