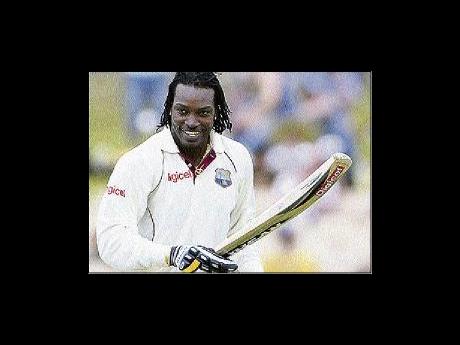 Gayle delivered a vicious captain's knock of 146 off 89 balls and shared in a double-century opening stand with Travis Dowlin as West Indies racked up 399 for five off 45 overs and then restricted the PM's XI to 312 for seven off their 45 overs in the high-scoring fixture.

Sent to bat at the Manuka Oval, West Indies - led by Gayle's power hitting - began rapidly and, after reaching fifty off just five overs, brought up the hundred in the ninth over.

Gayle, who was dropped twice - on 15 and 20 - began the game with three consecutive boundaries and made the local side pay for their fielding errors with a record knock.

The big left-hander reached fifty off 23 balls and a hundred off 57 balls before completing his whirlwind 89-ball innings, four short of the 150-mark.

Dowlin scored 72 off 85 balls with five boundaries while gathering 234 for the first wicket with Gayle.

Lendl Simmons, batting at number three, sustained a daunting run rate for the Windies with an unbeaten 70 off 49 balls with nine fours and a six.

After Narsingh Deonarine fell cheaply for three, Kieron Pollard thumped 36 off 17 balls with five fours and a six while Denesh Ramdin (22 not out) and Dwayne Smith (19) also played brisk innings in the touring side's imposing total.

The batting explosion was only interrupted by two rain stoppages, reducing the overs from the allotted 50.

Medium pacer Alex Keath (4-71) was the chief wicket-taker for the PM's XI, who were unable to match the Windies' free-scoring display in their run chase.

Tom Cooper lashed a splendid hundred, 160 off 120 balls with 14 fours and six sixes, but there were no other significant scorers for the PM's XI and the West Indies romped to an easy win ahead of their first one-day international (ODI) against Australia on Sunday.

Left-arm spinner Nikita Miller was the pick of the West Indies bowlers with three for 51 off nine overs, while medium pacer Darren Sammy claimed two for 37.

Miller was on a hat-trick in the 33rd over when the PM XI's captain Matthew Hayden (13) and John Hastings were stumped by Ramdin.

Preparing for the series of five ODIs and two Twenty20 inter-nationals against the Aussies, West Indies used nine bowlers. Seamer Smith (1-34) and off-spinner Deonarine (1-60) were the other wicket-takers.

The stylish win has come as a huge confidence booster for the injury-hit Caribbean side.

It was confirmed Wednesday that Dwayne Bravo will miss the series with a finger injury, the lively all-rounder joining other key players Ramnaresh Sarwan, Shivnarine Chanderpaul, Jerome Taylor, Fidel Edwards and Sulieman Benn on the sidelines.

Before the start of the match both teams took official photographs with the Prime Minister Mr Kevin Rudd.