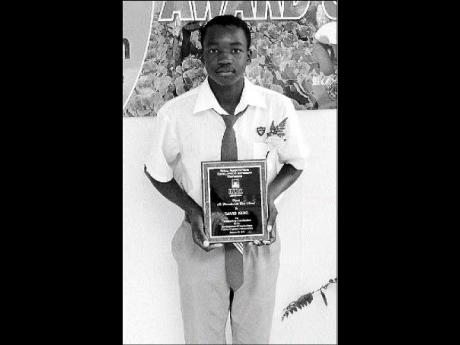 Political administrations have in recent years tried to rejuvenate the image of the Jamaican farmer from an old, bedraggled man with tattered straw hat on head and rusty machete in hand.

The aim? To woo young people to the field.

Well, at least one person has answered that call.

When the Clarendon office of the Rural Agricultural Development Authority staged its inaugural farmers' award ceremony in that parish recently, a 14-year-old student stepped up to receive his prize, sparking astonishment.

The teenage farmer was David Kerr, a student at Osborne Store Primary and Junior High School in the parish. Kerr, who is a member of his school's agriculture club, was all smiles as he told The Gleaner of his entry into the sector.

"I just find it interesting over every other club at school, and I just got into it," Kerr remarked.

The young farmer said he cultivates crops such as callaloo, cucumbers, sweet peppers, hot peppers, corn, among other crops, on just under an aggregate five acres of land at his home and at school.

While admitting that farming is time-consuming, Kerr explained that he is a stickler for organisation, allocating enough time for schoolwork, chores and cultivation.

"I do it because it is all fun. I work in the mornings early, from between five and six o'clock, and then get ready for school, which starts at 11 o'clock; and when I get home after 5 o'clock, I rest and do my homework," he said.

Kerr, who has his sights set on attending an agriculture school to fulfil his passion, told The Gleaner he intends to stick to farming in the long term and gain new skills.

"I have learnt to clear the land and to plough it; I have learnt how to harrow and to do a lot of other things with the soil for the production of crops," said Kerr, who credits his stepgrandmother for training his green thumb.

The teenager said his farming initiative was a collaborative effort, as teachers and family members invested in the project.

While praising God for his success, the boy farmer said he was soliciting assistance so he could further diversify his crop.