'A big boost to my career' 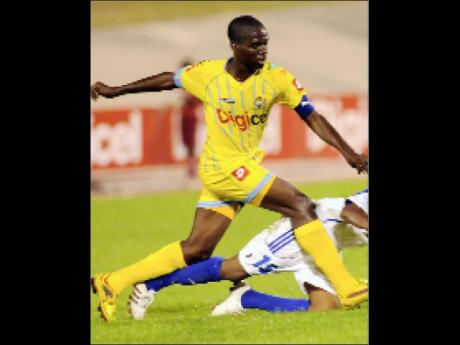 Before Kenardo Forbes stepped onto the field to represent the Reggae Boyz against Canada in their friendly international match last Sunday at the National Stadium many things were running through his mind but as soon he touched the ball his fear disappeared.

"I felt very good because this is my first cap for the senior team and I really enjoyed every minute of it while I was out there," said Forbes, who is a former Bridgeport Manning Cup star.

"I wasn't nervous because I knew from the training sessions that I was going to get a game because the coach was using me a lot and so I was prepared for it," he said.

Forbes added: "This is definitely a big boost for my career because to go overseas you need to have a certain amount of caps and this is my first one and all I have to do is to try and improve on my game and try to stay in the national programme as long as possible."

Forbes, an attacking midfielder, was brought on in the 73rd minute to replace Eric Vernan at right-back, an unfamiliar position for him.

"I was ready for whatever position the coach told me to play out there out and I think I played a good game at right-back," Forbes said.

The 21-year-old Forbes, captain of Digicel Premier League contenders Waterhouse noted that he will be working very hard to improve his football.

"I need to strengthen my upper body because the game is a lot more physical and you have to be in good shape if you are going to play at the highest level," said Forbes who led Bridgeport to the Manning Cup title in 2005.

Forbes added that he has been 'gelling' with the team quite well because he has been learning a lot of new things from the senior players.

"I was very relaxed and comfortable going out there on the field," said Forbes, who is an admirer of former Harbour View striker, Fabian Taylor. According to Forbes both the overseas and local player made him feel at home, like he was playing for his Waterhouse team.

"I would love to play a lot more games for the national team, but I know that I will have to work a lot harder in training," Forbes said.

He added: "I would love get an overseas contract at the end of the season, because my dream is to play overseas."