In your neighbourhood: Robinson affair 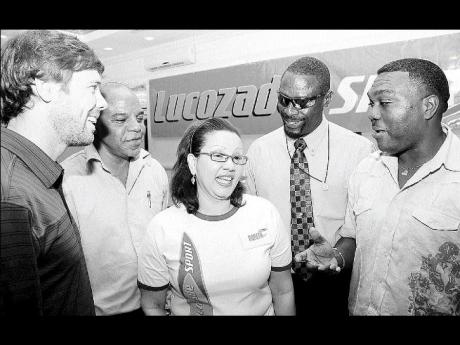 Douglas, 26, who only plays on Mondays due to work commitments, kept the family bragging rights even by winning Monday night's leg of the Horace Payne Memorial, paired with the juniors' card-playing coach Richard Phillips. Their winning score of 58.73 per cent narrowly edged out last week's winners Monica Cools-Lartigue and Marlene Fulford (57.94 per cent), while Hubert 'Brodsie' White and Michiko Asonuma finished third with 52.38 per cent.

Wednesday night's leg of the Dr David Levy Trophy was abandoned due to an extended power outage.

Two hundred and fifty coaches from several sporting disciplines, athletes and sports administrators turned up at the Hilton hotel on Wednesday for the fifth staging of the Lucozade Sport Workshop.

Nicholas Morgan, lead sport scientist at GlaxoSmithKline's Lucozade Sport Science Academy in England, was the main presenter.His presentation centred on practical sports nutrition in terms of building a step-by-step plan for athletes in order to maximize performance and success.

Sports psychologist Kadiya Richards, whose presentation focused on the psychological preparation of athletes, delivered the second presentation. Her topics included 'What to expect from working with a sports psychologist'. She referred to specific areas, namely: increased passion and enthusiasm for sport participation, increased performance through goal setting, reduction in injury recuperation time, reduction in fatigue while competing and improved performance during pressure.

Physical education (PE) teachers from the 31 MultiCare-assisted schools in eastern, western and central Kingston and Greater Portmore in St Catherine are expected to take part in the MultiCare 'Train The Trainers Basketball Clinic', which will be held next Thursday at Breezy Castle Centre, Kingston.

Coaching for the clinic will be conducted by the Jamaica Basketball Association and will focus on enhancing the skills of the PE teachers and on regulations for the upcoming MultiCare Inter-Schools Basketball Competition, scheduled for April this year.

The clinic is part of the MultiCare Foundation's Sports Programme. Under the guidance of MultiCare sports coordinator, olympian Keith Gardner, the programme aims to enhance the physical education process in the 31 MultiCare-assisted schools through the provision of training, equipment and supplies; and on inculcating positive values and the building of confidence and self-esteem in our young people.

Second place went to National Master Geoffrey Byfield, who also finished on five points but was relegated to second, using the tiebreak system. Tournament favourite and Jamaica's number one ranked player, FIDE Master Warren Elliott, who was returning to active chess after a seven-month break, took third place with 4.5 points.

Sunnyside, Longwood and New Bowens are second on seven points each, but they all, along with fifth-place Sanguinetti (five) and York Town (five), have played a game more than Milk River.

Gimme-Me-Bit, who played three games for four points, Rock River (four), Gayle (one) and Young Strikers, without a point from their two games, round off the 10-team standings.

The Asafa Powell Foundation Awards, which resulted from outstanding performance by athletes at the Queen's/Grace Jackson track meet were presented on Wednesday.

The main awardees were Odean Skeen of Wolmer's, who clocked 22.16 for the 200m Class 2, and Diandra Gilbert of Queen's for her time of 24.72 in the 200m Class One and 56.16 in the 400m.The top coach's award went to Danny Hawthorne of St Jago, the school which topped the girls' and boys' competition on the day.

Both presentations, which were made at the Hilton hotel after the Lucozade Sport Workshop, were well received by the large audience.

Azteca are the winners of the St Mary leg of the Insport All-Island Community football league.

Adrian Barnes in the 57th minute, and Ramash O'Creary eight minutes later, secured the win for their team, which now looks to the all-island play-offs.

Portsmouth (26) have the opportunity to widen their lead atop The Captain's Bakery St Catherine FA/ Major League, if they get past third-place team Black Lions (16) in a key match at Irish Pen this afternoon at 3:00. Portsmouth are on a 10-game unbeaten run, chalking up eight wins and two draws.

In other games, Cumberland host Flamingo at Cumberland High School, and joint fourth-place,De la Vega United should expect a fierce battle against Albion (16), currently in sixth position, at the De la Vega football field. All games begin at 3 p..m.

Racing United earned the right to meet Christian Pen in the Portmore Division Two mid-season final tomorrow, after chalking up six straight victories in the E-Services sponsored League. The final is set for the Passagefort playing field at 3 p.m. Leaders Racing United, currently on 18 points from seven games, go into the match with revenge on their minds, as they clash with Christian Pen, the only side to defeat them this season. Since their 3-1 loss in the first match of the season, Racing have gone on a six-match winning streak, while second-place Christian Pen (15), the only unbeaten team in the league, have won four and drawn three games. The teams are playing for the Genus Pharmacy trophy.

Four matches on in U-13 League

Four matches are on in the Colin Fagan-sponsored Leander Marshall/Portmore U-13 Football League this afternoon, at three venues.

The key match of the round pits red-hot leaders Wanderers (six) against third-place Passagefort (four) in the feature match at the Passagefort playing field, at 2:45 p.m. In the curtain-raiser at the venue, Daytona (six), joint leaders on points, clash with Cumberland (four) at 1 p.m.

At the Portsmouth playing field at 1 p.m., Waterford seek their second win in as many games when they take on Portsmouth, while in the feature match at the venue at 2:45 p.m., struggling teams Ascot and Arlington fight for their first points of the league.