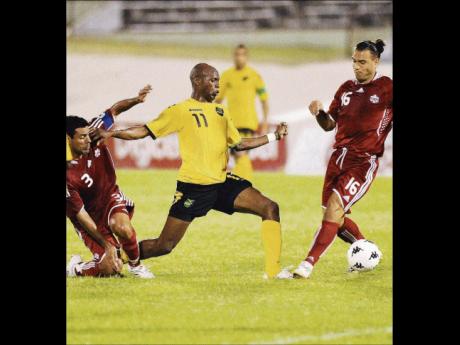 It was supposed to be a mismatch: out-of-competitive-shape Canada against motivated and more seasoned Jamaica eager to please at 'The Office'. Yet the performance of the Reggae Boyz reflected a mixed bag, despite their 1-0 win. Here's how they fared:

Overall, Dwayne Miller did not have much to do. But a few testing moments offered an intriguing glimpse of what Donovan Ricketts' main challenger for the top job will offer by the time the Boyz begin their qualifying campaign for World Cup 2014. Early in the match Miller was smartly off his line to punch away a dangerously swerving cross by Canada's Massih Wasseh. Late, with Jamaica hanging on to a lead, he denied Ali Gerba's thunderous strike with a brilliant tip over the crossbar. But Miller bobbled a free kick hit straight at him in the first half in a crowded penalty area. That could have cost Jamaica and is not good enough at this level. GRADE B.

Strange to see captain Tyrone Marshall operating on the flank, but this unit, with Shavar Thomas and Jermaine Taylor in the middle and Eric Vernan the other fullback, was not exposed often, except for a few anxious moments against the badgering pace of Gerba and Stephen Ademolu, plus the busy Wasseh. Neither fullback offered much in attack, with Vernan being tested in the physical confrontations. He was later replaced by Kenardo Forbes. Thomas's error led to Miller's second-half save, but overall Canada struggled to penetrate. GRADE B+.

The most puzzling unit of all. Lacked coordination, spark, poise and imagination early. Jason Morrison in the holding role is usually the picture of calm, but he appeared to lack urgency and inspiration. Rodolph Austin and Demar Phillips put in a hard shift, but the quality of passing was lacking all round and the unit, at times, especially in the first half, appeared disjointed. Omar Cummings, rotating between midfield and attack, showed loads of energy, especially against the tiring Canadians. But he too appeared a shade below sharpness, although his tenacity robbed Julian de Guzman of the ball and assisted on the game-winner. Credit him and Phillips with trying to get forward in attack, but Austin's long-range drive which flew high over the crossbar was one of the few shots at goal that came from midfield. Substitutes Navion Boyd, Richard Edwards and Kaemmar Daley injected spark into the second half, but overall a disappointing show. GRADE C.

The searing pace of Luton Shelton, especially, worried Canada all night. Devon Hodges shows promise but, like substitute Ryan Johnson, needs more games to truly stake a claim. Again, Cummings operating just off them was busy all evening. But too few shots on goal for Jamaica, despite threatening throughout. The finishing was sub-standard as well. Hodges' shot flew high from close in at a tight angle. Shelton, after speeding his way through a host of defenders, could only hit tamely to goalkeeper David Monslave from close in. But the striker's winner was a well taken powerhouse, which showed some confidence. GRADE C+.

Theodore Whitmore always appears willing to try new things, which is good. But against Canada, he didn't have it just right early. Marshall is always a more effective player in the middle of the park. And despite his relentless efforts, Austin's role needs more refinement. But overall, Jamaica came out in shape and aggression from the start. The second half was better coordinated and sharper by the Boyz. Credit Whitmore for the adjustments. Yet questions remain. Why was the ageing Marshall, still a fine player but still in pre-season with his club, called to play a game described as part of a rebuilding campaign when young defenders like Dicoy Williams - who did not make the final squad - and Adrian Reid have done well recently and need experience? Puzzling. GRADE B.

A win is always good. To start the year positively makes it better. Jamaica will miss out on World Cup 2010 in South Africa, but last Sunday's performance offered flashes that the country has solid building blocks with which to make a big push for 2014 in Brazil. GRADE B.