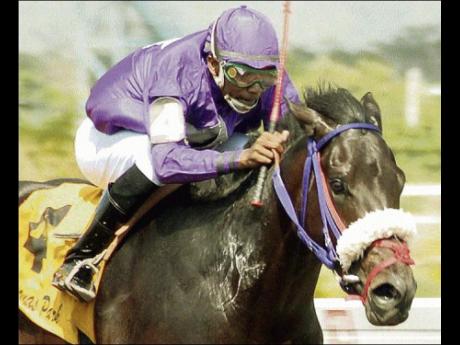 Nine very fit horses are down to face the starter at Caymanas Park today for the fifth running of the valuable King's Plate over 1500 metres, a grade II handicap for open allowance horses.

Run in honour of the 2003 Horse of the Year, A KING IS BORN, the trophy was donated by his owner, TOBA president Howard Hamilton, in 2006.

Of the nine declared, champion trainer Wayne DaCosta will saddle four, including the hot ante-post favourite CASSANOVA BOY, who is unbeaten in four starts.

DaCosta also saddles another American- bred 4-y-o gelding, NEW KINGSTON, who is coming off a recent win over the straight-five course; as well as his consistent five-year-old gelding THE GUARDIAN, who shoulders top weight of 58.5kg; and also SATAN'S RULE, who lacks the class to win.

With champion and stable jockey Omar Walker electing to ride the classy CASSANOVA BOY, the hint should be taken.

Despite the presence of QUICK & GRAY and the recent winners NEW KINGSTON, HAIL THE GENIUS and COLEMAN'S ROCK, the race will more than likely come down to a straight fight between CASSANOVA BOY and the progressive 4-y-o gelding, PRINCE OF PEACE, who returns pretty light (49.0kg) in a bid for his fourth conse-cutive win.

Trained by Richard Azan, PRINCE OF PEACE ran on strongly to catch and beat FOREVER MINE by a head in the Rajiv Maragh Trophy over 1100 metres on December 12, but this represents a much stiffer test.

Another thing that is going for the Deputy's Report offspring is the fact that he will relish the extended trip, not to mention that he has worked well in preparation for the race.

But CASSANOVA BOY beat him in decisive fashion when they last met over 1200 metres in October and is tipped to do so again.

Indeed, this speedy son of Najran looks the type to follow until his colours are lowered, having won his four races by the combined margin of 26 lengths. He has also been winning in fast times, notably his 1:11.4 over 1200 metres on October 19, when beating PRINCE OF PEACE into third place; and his 1:37.1 for 1600 metres on December 13.

CASSANOVA BOY romped the Fan Appreciation Day Trophy over 2200 metres when last raced on New Year's Day, and having worked brilliantly since, should show rivals a clean pair of heels from the convenient mark of 53.0kg.

'CASSANOVA' is definitely going places and should prove too strong for the lightly weighted PRINCE OF PEACE and QUICK AND GRAY in the drive.

Other firm fancies on the nine-race programme are UNBREAKABLE HEART in the second race; BULLET LINE in the fifth; down-in-class MOCHACHOCOLATTE in the sixth for the Altamount V. Armond Memorial Cup over 2000 metres; and the 3-y-o debutante, LIFEISJUSFORLIVING, in the seventh.