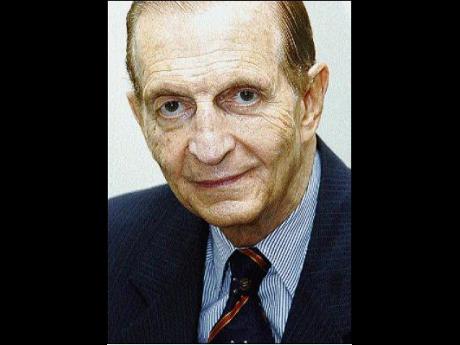 Today we begin a special series of excerpts from the autobiography of former Jamaican Prime Minister Edward Seaga with permission from MacMillan Publishers.

I had no intention of giving priority to my autobiography among the writing I wished to do after retiring from a life of 45 years of political representation.

I considered that there would be more time and more accomplishments to come. I did not intend to isolate myself from the happenings of public life and would, perhaps, find myself moving in other directions. In addition, my health was very good, so I was looking forward to many more years of deep thinking and robust activity.

The University of the West Indies (UWI) had conferred on me the rare honour of a Distinguished Fellow for Life and the venerable Institute of Jamaica had also bestowed on me its prized honour of a Fellow of the Institute of Jamaica. Later, I was invited to be Pro-Chancellor of the University of Technology. With funds raised by the chairman, UWI Development and Endowment Fund, Dennis Lalor, I accepted the invitation of the UWI Vice-Chancellor and Distinguished Fellow, Rex Nettleford, to spend five years at the University of the West Indies writing as well as lecturing on request.

The books I intended to write were all works I had already commenced: development of the child, indigenous spiritual religions, the origins of Jamaican popular music and the cultural roots of Jamaican folk society (as a part of national identity). These were all socio-cultural and anthropological works. A special project which I embarked on was a systematic collection of all the macro-economic and key social variables since the 1950s, which would provide for a data-led analysis of the economy since that period. In addition, I was also invited to write a weekly column for The Sunday Gleaner, the leading newspaper.

Yet when I was approached by MacMillan Publishers to write my autobiography, it was an offer that was difficult to refuse. I set myself a timetable of two years, from July 2006. It was completed in August 2008, but the finished work was by no means the same book as originally discussed.

It was intended to be around 150,000 words; it has expanded to 370,000, necessitating publication in two volumes. From early in the exercise, I realised that there was much more to be written than I had anticipated. But I rationalised the expansion on the basis that this was a work about 45 years of active involvement in public life, in addition to groundbreaking research. Inevitably, it had to be a long project. Nonetheless, by working days, nights and weekends, I completed it within the originally intended time. I had fallen right back into the workaholic pattern of my years in public life, which was not how I had intended to spend my retirement.

Although I had found more time for family, I wanted still more, because there were now four grandchildren: Chloe, Marcus, Gabriel and Isa, as well as our own little one, Gabrielle, all ranging from under one year to nearly six years. Their cuteness at this age made it even more compelling that I should have time for them.

From the beginning of this project I recognised that I was carrying a unique and historic responsibility. I was the only remaining person who had been involved, in various positions of leadership at the highest levels, in the development of the country from before independence: as prime minister, leader of the Opposition, minister, member of the Legislative Council (the Senate), member of Parliament and party leader, the last-mentioned for 30 years. I participated, in one capacity or another, in all the major political initiatives which the country pursued and in those events which became turning points in Jamaican history.

As a consequence, it has fallen to me to do what cannot be done by anyone else from an intimate perspective - to write a biography which falls as close to a presentation of the history of the period as possible. Aware of that heavy responsibility, I have tried to adhere to an objective, unbiased presentation. I am sure that the passion of certain events overtook me at times, and that on other occasions some bias has filtered in as the story unfolded, but there were times when the brutal truth demanded raw presentation because history requires an accurate record. As Harry Truman said: "I never gave anybody hell. I just told the truth, and they thought it was hell."

Don't miss part two of this special serialisation in next week's Sunday Gleaner.