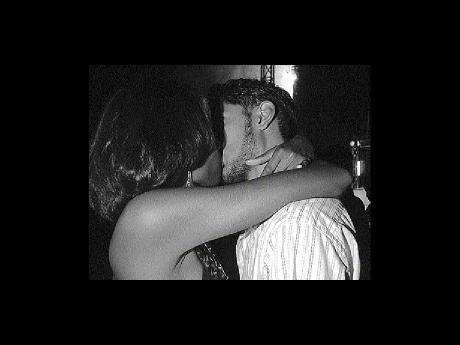 The date wasn't going well. Nathan shot Maria a quick glance before returning his gaze to the winding road of Jack's Hill. She was sitting stiffly upright, her arms crossed and hands clasped underneath her elbows, brown curls spilling on to the back of her neck. Her lips were folded inward, in that politely disinterested look women often have, her eyes staring straight ahead. Silver teardrop earrings dangled from her ears, and she was wearing little make-up, only a light dusting of bronze on her eyelids and bright red lipstick on her generous lips. A Kanji tattoo on her shoulder peeked out from beneath her white blouse.

Somehow he had expected to have a more intriguing evening with a woman like this, someone with an exotic name like Maria, who wore bright red lipstick and had a tattoo. His co-worker had teased him with relish when he heard about Nathan's plans for the night.

"Maria, from HR?" he had asked. "She look like a wild one, mind you cyan manage her!" Nathan had laughed good-naturedly, but secretly he had half-wished that his date lived up to the rumours, and on his way to pick her up, he allowed himself to indulge in fantasies of trying to fend off her advances all evening.

However, Maria had turned out to be quite placid, not making a fuss over the fact that he was 20 minutes late, not chattering non-stop, not taking several minutes of dramatic exclamations before being able to decide where to go for dinner. It was nice, this change of pace from most of the women he dated. But Nathan found that the Maria that was with him tonight seemed quiet and dull. During dinner she had picked at her food blandly, and didn't seem to have very much to say. He sighed.

Maria heard Nathan's heavy sigh and felt a stab of irritation. What did he have to be disappointed about? She was the one wasting two hours of her life on this pointless date. She had been waiting for him to gather the courage to finally talk to her, after weeks of surreptitious glances and awkward moments in the elevator. Like most of the women at her office, she thought he was superbly good-looking. She liked the way he was always well-groomed, his moustache and goatee lined up to perfection. She liked the tiny diamond stud in his left ear, the way he pursed his lips when he was thinking, the way he carried himself with confidence.

She had been flattered and delighted when he'd asked her to have dinner with him. Maria found that most men didn't take you out on dates really, they just kept giving you looks and calling you and coming by your house until a relationship was somehow formed. She was happy Nathan had taken some initiative, but ever since he picked her up, the evening had fallen flat. He seemed awkward, uncomfortable with himself. He seemed to be waiting for her to do all the talking. She crossed her arms tighter. She couldn't wait to get home.

Nathan decided to break the silence. "Did you have a good time tonight?" She looked at him. "Did you?" she asked, with a challenge in her voice. He shrugged. "It was ... interesting." Maria made no reply.

"Maybe we can do it again when you're in a better mood," he offered in an obliging tone. Maria looked at him with indignation.

Her voice was cut off when Nathan suddenly slammed on the brakes, the car screeching to a halt. Maria's head snapped back against the headrest as she gripped the door handle. Once she caught her breath, she turned to Nathan to ask him what the hell was wrong with him when a blur of movement caught her eye. Directly ahead of them, a pick-up truck was parked diagonally in the middle of the road, making it impossible for anyone to pass. As Maria watched, three men hopped out of the truck and started towards them. They were all carrying objects of some kind and when she looked more carefully, she realised they were handguns. Fear drummed in her chest and she turned to Nathan with wide eyes. His hands were locked onto the wheel, his face grim, his eyes watching the approaching men carefully. As the men got closer they began to shout obscenities at them.

Maria could only stare at Nathan with terror-stricken eyes as he moved one hand from the steering wheel to the gear stick. The men were almost upon them when Nathan suddenly threw the car into reverse and backed away from them, the tires squealing in complaint. Shouting, the men broke into a run and raised their guns. Nathan shouted at her, pushing her head down. The car careened down the hill backward, and Maria screamed when she heard the unmistakable sound of a bullet hitting the car's windshield. She kept her head low as they shot backwards. She was sure they were going to die.

The car began to skid on the muddy road. Nathan cursed loudly and spun the steering wheel violently, throwing the car into a 180-degree turn. He shoved the stick into first gear, and the car shot forward. He didn't have time to look at Maria, to see if she was all right. Adrenaline pumped through his veins as he glanced at the rear-view mirror, watching the disappearing figures of the gunmen behind them.

Later, after leaving the police station, they had little to say to each other. They called a taxi, leaving his car at the impound lot for evidence. In the back of the car, they sat without touching. Maria was remarkably composed, he noted. At the police station she had recounted the experience with a steady voice. But he saw that her hands were shaking the entire time. He paid the taximan and asked him to wait, following her inside to help her check all the doors and windows. Then he paused at the front door, unsure of what to say, feeling bad about leaving her alone.

She nodded and swallowed. Then she shook her head. Finally she began to shake, her nerves getting the best of her, a sob escaping her lips. It was a wretched sound and Nathan reached for her instinctively, his concern overriding his own fear and shock. He crossed the room and pulled her to him, squeezing her close. He felt his own control starting to slip from him, the fear beginning to clutch at his heart. They could have easily been killed.

Maria flung her arms around his neck, pressing her face into his shirt. Her chest was heaving against his. Nathan relished the feel of her soft, warm body against his. After everything that happened, he wanted to be close to someone, he wanted nothing more than this feeling of being truly alive. Maria gave a soft, shuddering sigh, and he couldn't bear it, he grasped her face in both hands and kissed her fiercely, roughly, in a way that he had never kissed anyone before. Maria gave a small moan of relief, her body folding into his, her fingers winding through his hair. Outside, the taximan cursed to himself and sped off, muttering about irresponsible young people.

Inside the house, Maria and Nathan held on to each other, they undressed each other with fervour, never breaking contact as they collapsed on the living room floor together, each desperately needing the warmth and the closeness of another human being.

The treacherous Kingston night passed into morning. In Maria's bed, they held each other, and discovered a measure of comfort neither of them had ever known.