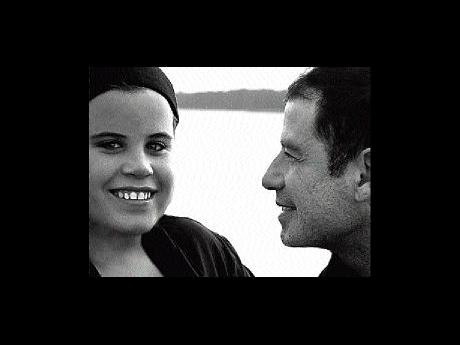 In this image released by Rogers and Cowan public relations, actor John Travolta (right) is shown with his son Jett in an undated family photo. - Contributed

After a year of insurmountable grief, John Travolta has returned to work. He took most of last year off to mourn the death of his 16-year-old son, Jett, who died on January 2, 2009, of a seizure while vacationing in The Bahamas.

Now, the actor has returned to film in From Paris With Love, a fast-paced spy movie filled with action, stunts and comedy, co-starring Jonathan Rhys Meyers. The movie opened last Friday.

Travolta recently talked about his son and the movie.

So many people felt pain for you - even people who have never met you. What does that say about the kindness of strangers?

Oh, I've never seen anything like it ... My son had such an enormous effect on the world and the kindness of fans and people of all types and sorts around the world have been amazing. I've never felt more of a flow of support and love as I have in the past year, and we needed it. ... You're kind of a sinking ship, and you need all the king's horses and all the king's men to keep your head afloat, and we had it.

And you're doing OK?

It's been hard. We've worked every day on it as a family and as individuals. It's the worst thing that's ever happened to me, bar none, but I think the help is helping us.

John, you recently flew a plane of supplies to Haiti to help earthquake victims. Does helping others with loss help ease some of your own pain?

Absolutely. I think help is probably the biggest button on the planet. People need to help each other. They want to feel like they can help and when you have the opportunity, I think most people do help, and I had this rare, rare privilege to have this big, empty plane in my backyard and I filled it with supplies and doctors and it was an awesome opportunity.

You did much of your own stunt work in your latest film. Does your dancing background help?