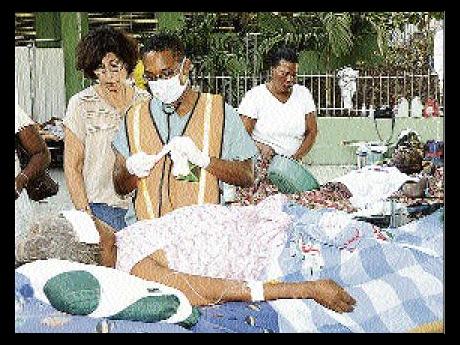 Jamaican medical personnel attend to an earthquake victim in one of many makeshift outdoor 'hospitals' set up in Port-au-Prince, Haiti. Many Jamaicans, in true neighbourly fashion, assisted Haitians affected by the quake, donating cash, food, water and clothes, while others flew or sailed in to assist health and search-and-rescue operations. - Ian Allen/Photographer

Jamaican relief workers will remain in earthquake-ravaged Haiti for at least one more month.

That decision was made on Friday after a CARICOM team gave the Government a commitment to finance the Jamaica Defence Force (JDF) relief base in Haiti until March 5.

The additional money will be put up by the government of The Bahamas and follows the decision by CARICOM to refund Jamaica the $40 million already spent on the Haitian operation.

Jamaica, one of the first countries to rush to the assistance of Haiti after the January 12 earthquake, had decided to pull out its relief teams after regional and international partners failed to cough up money they had promised.

But CARICOM member states urged Jamaica to maintain the JDF base in Port-au-Prince, which is the hub of regional relief efforts in Haiti.

Last Friday, General Secretary of CARICOM, Edwin Carrington, and Executive Director of the Caribbean Disaster and Emergency Management Agency Jeremy Collymore travelled to Jamaica for talks with government officials and disclosed the additional funding from The Bahamas.

A CARICOM team also travelled to Haiti yesterday for a meeting with President René Préval to discuss the region's contribution to that country's recovery, including a proposed primary health intervention programme.

Teams from the JDF, the Jamaica Fire Brigade and the Ministry of Health have been in Haiti since the earthquake providing invaluable relief services and saving thousands of lives.