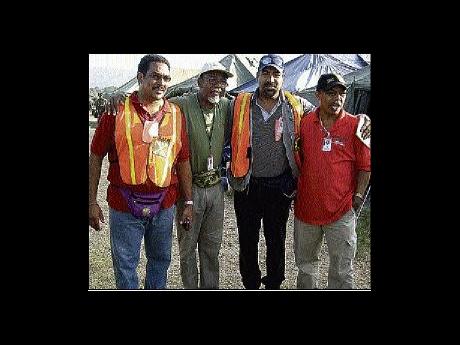 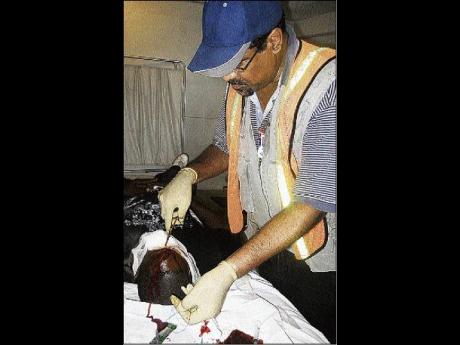 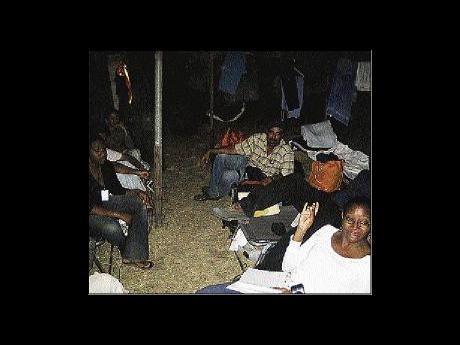 GENERAL PRACTITIONER-turned-politician, Dr Wykeham McNeill, is one of several Jamaican medics who went to disaster-ravished Haiti to help victims.

Following the devastating effects of the January 12 catastrophic earthquake, McNeill left Jamaica with a group of 11 medical personnel on January 24 and returned on January 29.

The other doctors in his group were Drs Mark Minott, Ken Vaughan and Warren Blake.

Having decided on this deed of philanthropy, Dr McNeill shared his decision with his constituents in Westmoreland, who gave him their blessings.

In preparation for the visit, the medical team was vaccinated against every possible communicable disease. On the morning of January 24, Dr McNeill left with only a backpack of essentials: his stethoscope and a sleeping bag.

Upon arrival at their destination, as they left the C130 craft, he saw a bustling scene at the airport, including a table at which were seated five army personnel who now represented Haiti's air-traffic controllers. They were met by soldiers who escorted them to their camp at the side of the runway. Dr McNeill was about to swap his comfortable residence at home in Jamaica for a tent that slept 25 persons on cots too small for their frames. There were three pit toilets and an outdoor shower, a stark contrast to the relatively luxurious digs of the United States personnel, whose neat, white air-conditioned tents stood out like icebergs in the deep blue sea.

In the week ahead, he would have to shed all thoughts of privacy and focus instead on a skill he had not used since 2001.

But in an interview with The Sunday Gleaner last week, Dr McNeill said he had no regrets. "Under those circumstances, you realise the strength of your medical training; you get a sense of fulfilment in the midst of suffering and misery, and you adapt to the mood of the camp," he said. Dr McNeill said his colleagues knew they were making a difference and even though their diet and surroundings were not what they were used to, no one complained. Instead, he has returned with a deep respect for the Jamaica Defence Force (JDF).

"The officers and soldiers have done a fantastic job," he told The Sunday Gleaner. He also revealed that he has a deep sense of pride in his country because "Jamaica has done itself proud by helping its neighbour".

Dr McNeill said he is convinced that if Jamaica and other nation states had not gone in and begun to help the Haitians in their hour of need, by now, refugees would have begun to arrive here in droves. The long-term costs of taking care of them here would have far outreached what it is costing to send help there now.

"The level of despair among the people is phenomenal," McNeill said, pointing out that there is a real reason for their fear. He has seen sorrow up close; he has seen the vacant stares of mothers who lost children and children, left orphaned.

The Jamaican team of medical and army personnel inside the tent at night during one of their daily team meetings.

He said one could not begin to imagine that thousands of people have now opted to sleep on the medians in the streets, in open fields, or anywhere outdoors, rather than return inside buildings. The concrete structures just flattened, and upon close examination, Dr McNeill saw why. He said there was no sign of steel reinforcement as far as he could detect.

"The structures are devoid of steel; blocks are just held together with a thin layer of cement. Building codes will now have to be drafted before the rebuilding process," he said.

Asked to explain the reason for his renewed respect for the JDF, Dr McNeill said that other than the United States, Jamaicans were the first responders from the region to arrive in Haiti. The team of soldiers, having got there, set four objectives: search and rescue, security, sustain the medical staff, and sustain themselves. "Within 48 hours, everything was up and working. The army is vital to our lives. No other group in our society would have been that prepared to act, and at that level. The service they provide in a crisis is critical," he said. He added that they are the only ones who can sustain themselves and others in the glaring absence of everything needed for daily existence.

A general practitioner, Dr Wykeham McNeill had to stitch an open wound on a man's forehead.

Dr McNeill said the team worked from 7 a.m. to 7 p.m.; ate and showered by 8 p.m.; held nightly team meetings till 10 p.m.; and, had lights and generators turned off by midnight. He said he lost a great deal of weight because their daily diet consisted of Vienna sausages or sardines (one and a half per serving) and crackers for breakfast, and a spoon of rice, with a serving of bully beef and a drink for dinner. No cajoling of the server would get you any more. And they did try to get more, but they accepted drinks with no ice and welcomed each meal, always cognisant of the fact that most survivors of the quake had less, or nothing at all.

They treated up to 80 patients every day and occasionally, they arrived on the scene of need a little too late. Clinics were even held under trees out in the countryside, and Haitians made long lines to wait for both food and medical attention.

Back home, as they continue to keep abreast of activities in Haiti, all members of the team have concluded that in spite of leaving private practices at home and their comfort zones, it was an amazing experience and they have no regrets.