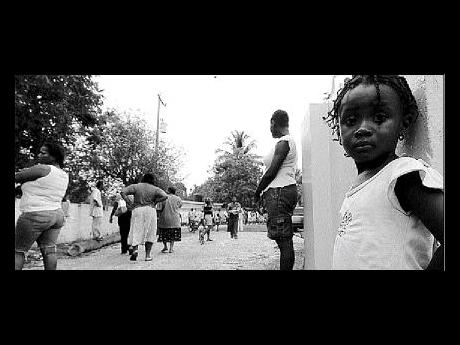 Residents of Big Lane, Central Village. There is a no-man's-land between Big Lane and Little Lane. - Ricardo Makyn/Staff Photographer

THERE IS Big Lane and Little Lane. Both are located in Central Village, St Catherine. They are neighbours, but between them there is no middle ground.

For well over 20 years, residents who dare to cross the line from one impoverished street to the next face the risk of being maimed or even killed.

"Yes, when the man dem have a problem here about anything, the gun dem start to fire and people from Big Lane can't go over Little Lane, so all who not involve still suffer from the inconvenience,'' a resident told The Sunday Gleaner.

According to residents, both lanes are aligned to the ruling Jamaica Labour Party (JLP), but gang feuds set them apart.

"The lack of work caused persons to become robbers and even car thieves, and the fight for turf, are just some of the problems now existing," another resident remarked.

Of the 164 reported cases of homicides in the St Catherine South Division last year, Central Village accounted for more than 20.

Compounding the feud between gangs operating in the lanes is an equally bigger problem in the hills of the St Catherine constituency. Residents in areas like 'Zambia', 'China Town' and the Twickenham Park Housing Scheme, who are known supporters of the People's National Party, have frequent confrontations with residents of Big Lane and Little Lane.

"If you come from any area 'bout ya which is JLP, then don't go up on the hill, as you could get shot," warned Margaret Thelwel, a resident.

"The guns are our major concern. Right now, we are still investigating the recent flare-up in the 'Zambia' community," the inspector said.

He told The Sunday Gleaner that a social-intervention approach is being employed to stem the flare-up of violent episodes.

"In relation to social intervention, we (the police) have engaged the political directorate, business, clergy and the National Housing Trust, so as to have all the persons directly involved in the process of change," he said, adding that his committee was working closely with community groups, such as the White Marl Business Group, which is to oversee matters affecting businesses in the area.

A peace march was held in December last year to bring unity to the affected communities. However, residents remain fearful.