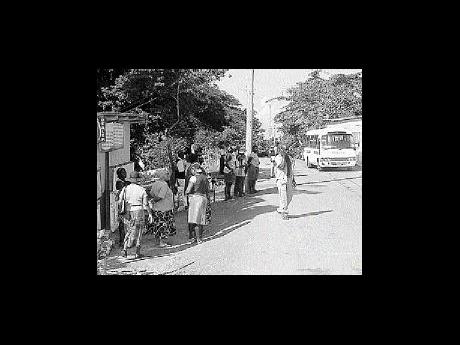 Residents standing outside the business place of a murder victim in Meggie Top, Salt Spring, Montego Bay. The community has figured in many of the crimes that have been committed in St James. - Photo by Nagra Plunkett

THEY DARED to enter enemy territory and paid for it with their lives. Three young men were shot dead while attending a wake for their cousin at Meggie Top in Salt Spring, St James. They lived in neighbouring Buck Toe Lane, which was at war with Meggie Top.

According to residents, 22-year-old Ricardo Rickettes, 26-year-old Roy Rickettes Jr, and 24-year-old Fabian Bailey were killed because they had "foolishly" crossed the borderline.

"Me blame 'Blood' (Roy Rickettes). He shouldn't leave him head back careless inside enemy territory," stated one of the friends of the deceased. "We are not going to take it lightly though ... trust me on that."

Residents of Salt Spring will not forget that night - April 18, 2009. The unfortunate predawn incident occurred while a wake was in full swing. Mourners from the area and several outsiders had gathered in the yard, located in Buck Toe Lane, to honour the life of a well-known hotel employee who had accidentally drowned in a pool at his workplace.

At approximately 1 a.m., the lights illuminating the bars, which were located at opposite ends of the yard, suddenly went out. Seconds later, heavy gunfire erupted in the yard, sending those who had gathered, including visiting co-workers of the deceased, fleeing in panic.

When the shooting ended, the three cousins - all from nearby Meggie Top - lay dead in the yard with gunshot wounds to their heads and upper bodies.

Based on reports garnered in Buck Toe Lane, gangsters in that area had a long-standing feud with Ricardo Rickettes, also known as 'Blood'.

Today, Meggie Top is still angry because 'Blood' was highly revered among his peers. Some of his friends openly declared that there could still be reprisals.

Roy Rickettes Sr, still mourning the loss of his son, described the gang warfare in the area as evil. "The devil finding work for idle hands," he said. The solution, in his view, to the vicious cycle of murders, is to create employment for the many idle youngsters in the area.